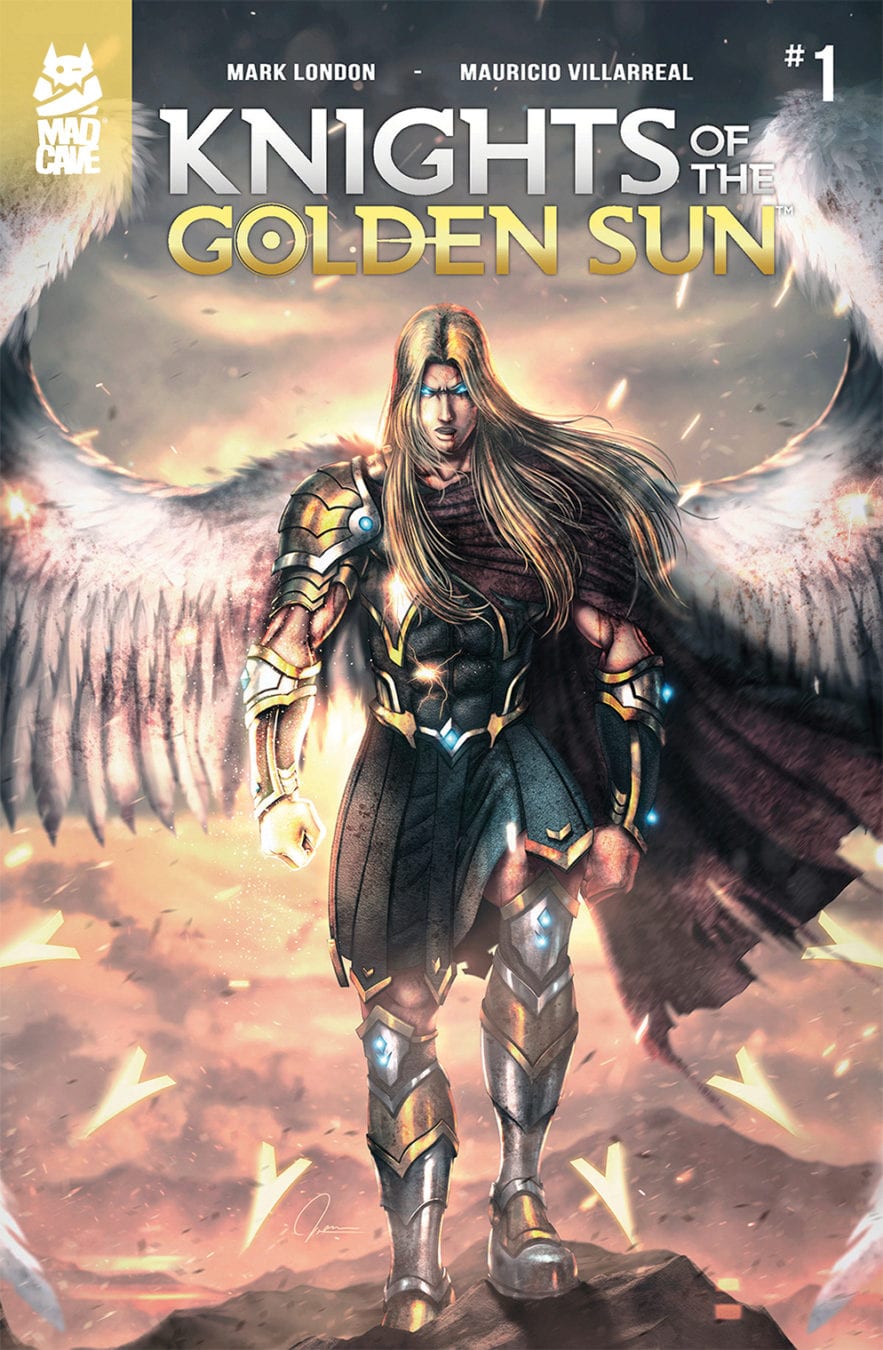 From the Old Testament to the New Mutants we have always been fascinated by heroics and the bigger the better. So it really should come as no surprise that so many of our most cherished spandex clad super heroes can trace their divine roots directly back to the sandal and toga sporting protagonists of the ancient religious writings from the scriptures of the Judeo-Christian teachings, the Koranic writings of Islam, as well as many of the Eastern teachings of the Krishna and Buddhism. Certainly there is nothing more heroic than saving all of humanity and since that is at the core of most of these writings I don’t see it as much of a stretch to consider these the very first super hero stories. Just imagine a Justice League: Divine featuring Judas Maccabeus aka The Hammer, King David, Moses, Miriam aka The Water Bringer, Mary the Mother of God and Jesus aka The Lion. The battles they would fight to save the world from the Legion (for we are many) of Doom would be, well biblical. With heroes and heroines like this filling the pages of the Bible, the Koran, the Talmud and volumes of other sacred tomes, why look anywhere else for inspiration? Well the creators of Knights of the Golden Sun at Mad Cave Studios did just that and the result is one of the most original titles to hit the racks in quite some time. Writer Mark London and artist Mauricio Villarreal have set their archangel epic in the 400 hundred year span between the Old and New Testaments, a time when God was said to have left the throne of Providence vacant. During this tumultuous time an all out war erupted between the powers of good and evil in the Archangels and the Fallen ones led by Lucifer.

London re-imagines Michael, Gabriel, Raphael and Uriel as warrior-angels of the Father’s Throne. As a cradle Catholic I am very familiar with the image of Michael the Archangel casting Lucifer out of Heaven. 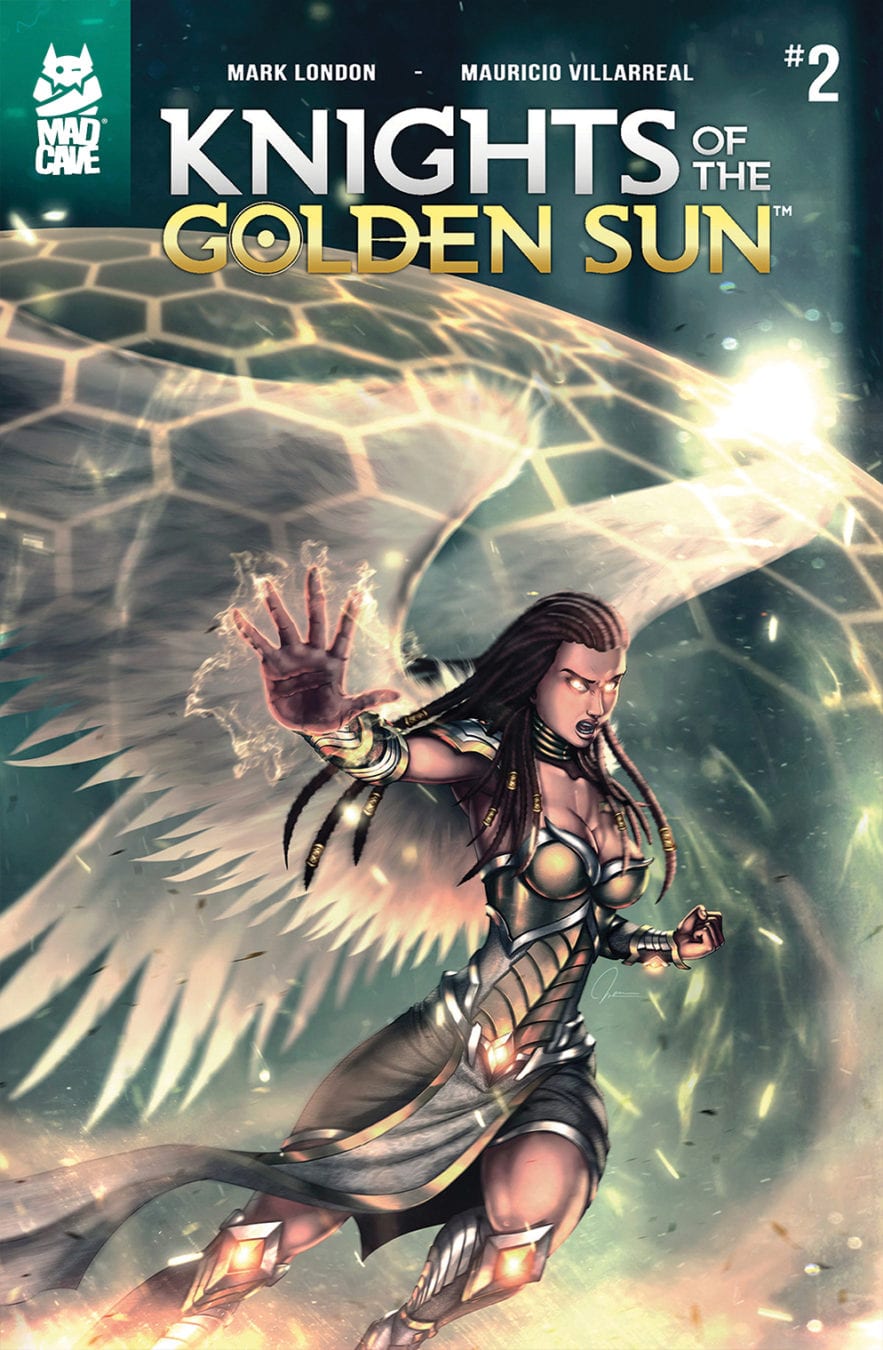 I would marvel at the power in Michael’s steely gaze, the strength in his armored form as he held the reptilian Satan under his boot, leathery wings crushed beneath his divine might. The only other place I remember feeling that same awe as a child was in the pages of my dog-eared, well read DC and Marvel Comics, which I would often sneak into mass in the inside pocket of my little suit jacket. For me all these mighty heroes lived in the same world, my child mind, where Thor sat beside Moses and Michael led the Hulk and Superman into battle against Hydra and the fallen angels of Hell. That is the magic at work in the pages of London and Villarreal’s Knights of the Golden Sun, yes these are the angels of the Bible, however they have as much in common with the art of Jack Kirby and Sal Buscema as they do with the depictions of the angels by Raphael, Albrecht Durer and Sanzio.

The first three issues of this title have set up the coming war. David brings a human element to the narrative, his naive nature tempers his indomitable spirit in the face of such insurmountable consequences. Of course that’s the beauty of David, in some ways even more than Jesus, David represents humanity in the court of the Divine. London makes these characters relatable without diminishing the angelic nature of their being, he casts them in the light of their amplified character aspects. They are larger than life while possessing flaws of their own, on a scale commensurate to their station and that is what London does so well. The drama he creates by telling this story from the Archangels perspective allows us to feel everything on that level as well, the frustration of Michael seeking to win Lucifer over to the side of the angels, the pain of that loss and all while fighting to defend the Father’s vacant Throne which has become synonymous with God’s Legacy. 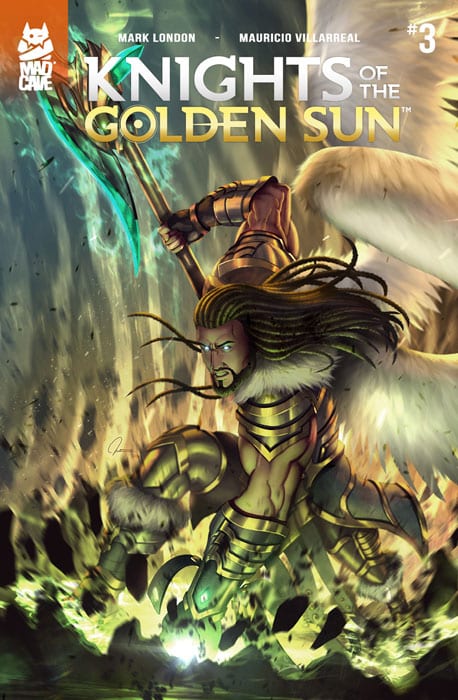 The stakes are huge as they always are in Bible-based epics, Neil Gaiman’s Sandman, Garth Ennis’ Preacher and Grant Morrison’s Nameless all deal with God’s relationship with us through his Angels. Ennis uses the wild west, Gaiman uses the Dreaming, however Morrison dives straight into the source material and that is London’s strength here. The metaphors for Heaven and all its Divine denizens are as limitless as the stars in the night sky and while there is something to be said for leaving a narrative open to a degree of interpretation, when dealing with such vast subject matter the strength lies in the storytelling. The character work in Knights of the Golden Sun is what elevates it above other esoteric tales, London takes several liberties with the archetypes like presenting Gabriel as a female angel called Gabrielle, traditionally sexless beings, London makes the angels a bit more relatable by giving them more visual gender roles.

One of the most unique aspects of Knights of the Golden Sun is the scale of its world building, by alternating scenes based in the ethereal realm with others based in actual geographical locales, London and Villarreal are able to bring an element of historical fiction to the work that sets it apart from other titles with a biblical slant. London’s script weaves historical figures like Mary, Joseph and David into the narrative with the Archangels to bring the supernatural and the natural together in the very same way as the Bible. That sounds like high praise, but if you have read Knights of the Golden Sun you know it’s well deserved.

Visually, Mauricio Villarreal brings this surreal world to life with precise use of light and shadow. His character designs call to mind the work of Joseph Michael Linser while bringing an element of Giger’s airbrush mastery especially to the Archangels’ armor. The ethereal world comes to life beside the geographical with equal attention to detail as Villarreal expertly renders landscapes of clouds and stars as if seen through the lens of an observatory’s telescope. The look of this book is as epic as the narrative. It has a decidedly anime flavor, certainly more than any of the other works I’ve mentioned. It feels kind of like looking deep into an old heavy metal album cover as the images take on a life of their own. There’s big operatic drama at work here, but like opera performed by Iron Maiden, everything is amplified, the peril, the conflict and the stakes are all pushed beyond the limits.

Knights of the Golden Sun captures the bombastically over-the-top elements of anime, the universally pondered concept of good versus evil and the gorgeous visuals of a Raphael painting. London and Villarreal have tapped into the esoteric world of the Archangels to tell a story as old as humanity, written where God touches mankind with his infinite mercy. The very definition of hell is the absence of God, so what else could exist but war when God removes his divine presence from us. Mark London’s dialogue, timing and overall storytelling prowess all serve to craft one hell of an epic tale of warfare in Heaven. The third issue of Knights of the Golden Sun is available at your local comic book shop or digitally as well as issues one and two, I recommend grabbing all three and reading the hell out of them. 5/5!

By Nemesis 8 hours ago