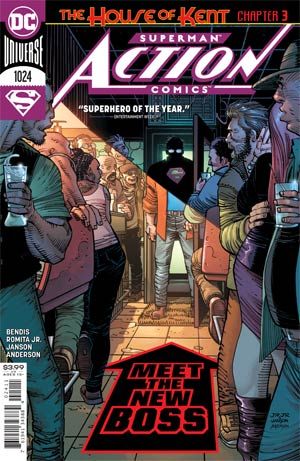 Let’s face it. Part of the reason why Superman has not really done well in the DCEU, is because of his vulnerability. Trust me I get it; his tragic past should make it an intriguing story for the character that eventually becomes Superman. Lately readers really have not been gearing up for more stories about the man that is impervious to everything except a little green rock that comes from galaxies away, magic, and lead. Hopefully the House of Kent story will be enough to rev the meter.

What sets Action Comics #1024 apart from most Superman stories is how it handles his friends and family and turns them into tertiary effect victims. While most stories focus on the praises of his actions #1024, but most do not devote enough time to cultivating an understanding that it is a small world and the very act of combating evil and corruption can leave a path emotional wreckage behind especially for Superman and friends. And if they deal with this, it is usually only in order that the full revelation of the loved one’s fate will carry more weight.

Action Comics #1024, written by Brian Michael Bendis, opens on a Superman, both Superboys and the Brainiac actively looking for the Red Cloud (First appearance as Robinson Goode DC Nation #0) after she dared to harm one of Superman’s allies.

What will follow for Superman is likely another showdown with the Red Cloud after his last fight did not go well. But at least he has the Super Family to help this time. Interestingly quite a few panels do take place at the Daily Planet, but I thought Jimmy Olsen was in charge? Apparently, that does not apply here.

The flow and mood for Action Comics #1024, because it jumps back and forth in between establishing Superman as see-all, hear-all, kill-all, then jumps to the seriousness of the Daily Planet being torn asunder by a FBI raid, but not without wisecracks from the Superboys. There was little bit more gore than I was expecting from John Romita Jr. but I liked and would encourage him to go nuts in further issues. but Red Mother is an example, of quiet horror. This issue relies on moods, ideas, and implication, rather than the actual “action” all difficult to catch on first reading, because I felt myself pulled in an invested.

Red Cloud has already shown that she has so much potential of creating a terrifying Aura of spiritual unease lurking in the shadows in which the Kent family will have to operate from now on. I’m still amazed that Red Cloud hasn’t caught on with speculators. DC Nation #0 was basically free but there was a 1:500 variant out there. Especially Action Comics #1001, where Red Cloud appears in her natural form.

By Daniel Clark 8 hours ago

By Lucas Fashina 9 hours ago