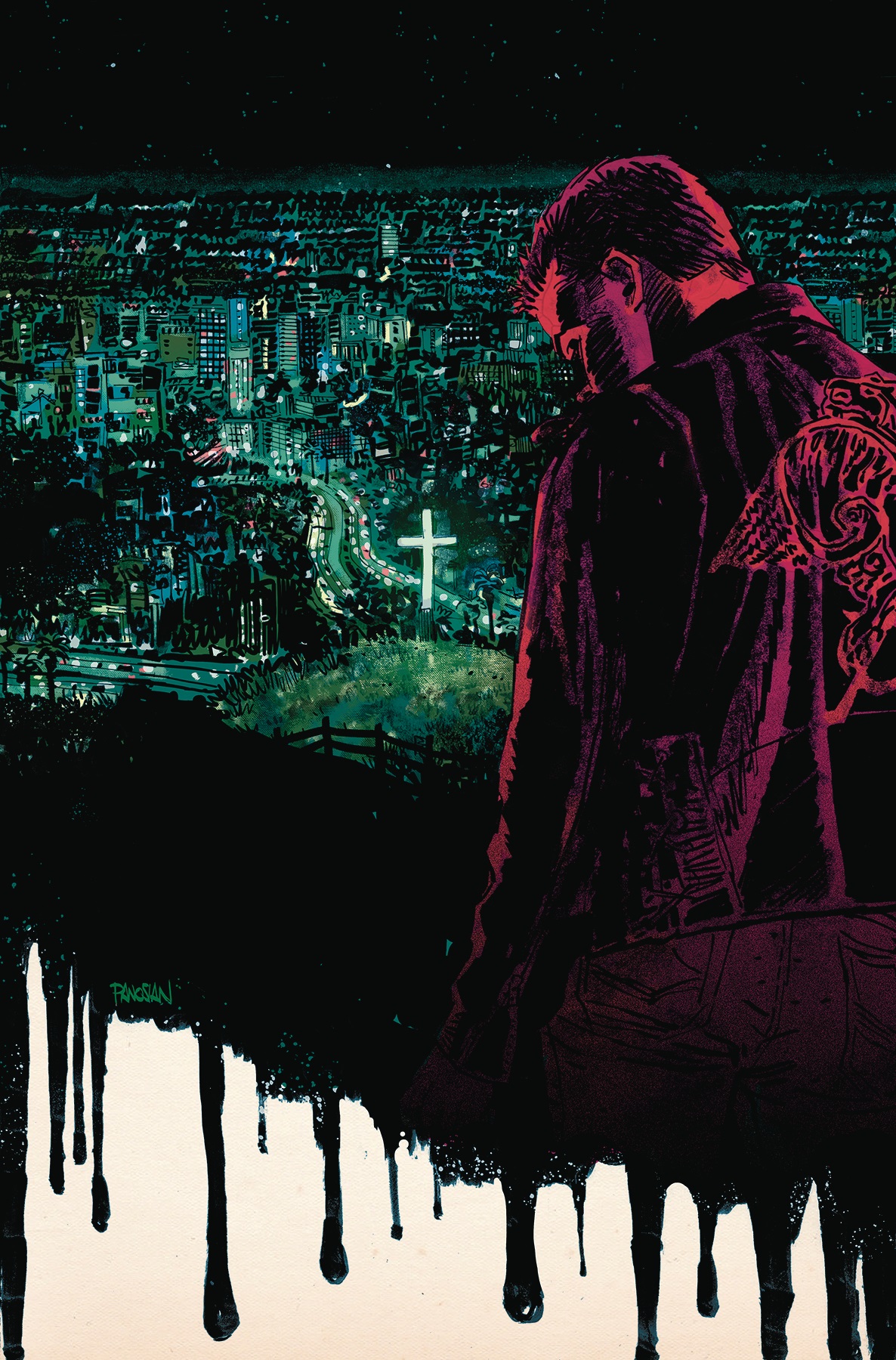 Following the successful comic book re-start / re-imaging of Buffy the Vampire Slayer, it would be a  safe bet to assume that the vampire with the puppy dog eyes, Angel, would be silently making his way to Sunnydale.

The world is full of demons and some of them, like social media, unlike our friendly vamp, don’t have a soul.  Case in point, an app that calls out to the lonely, the disenfranchised and those who may not fit within the boundaries of societal cool.  Angel, on the bidding of his mystical guide Fee-Fee, is set for a trip to the lovely Sunnydale to face his internal and external demons.  Throw in some Angelus stuff and you have yourself the first issue.

Bryan Edward Hill is certainly displaying a high level of eclectic creativity, with recent work on the controversial American Carnage along with the more mainstream Batman and the Outsiders.  I have been a fan of Hill since Postal and his run on Detective Comics.  Here, Hill gets to use his extensive screenwriting experience, giving the comic a sort of TV feel.  Hill sets his stall out early doors, using the past to show the duality of Angel to great effect.  The comments around social media are also well observed, given how vitriolic Twitter can be.  The setups in the book works well, even obeying vampire lore more than once.  The dialogue matches the shows tone well, again Hill’s past TV work coming in handy, possibly showing that Hill has spent time looking at the show.  Regardless of these facts, the comic is not a carbon copy; very much like Buffy, it is almost a what could be Angel.  The best way to consider the book is too try and forget the actual events of the series, but to keep the tone of the show in mind and of course, if you are a fan of the show, you recognise certain elements.

For tie-in books, no matter how far removed from the source material, a lot of the buy-in is due to the likeness of the art.  Here, Gleb Melnikov does just enough to make Angel look like David Boreanaz, more successfully in vampire mode it has to be said.  With Hill’s script, Melnikov doesn’t have to worry about Cordelia, Wesley and the rest of the gang (yet?).  Melnikov does a fantastic job in the first act, which he colored, setting the horror scene’s well.  There is also different styles in play with a number of characters having less angular faces than others.  I am not sure if this is used to highlight the difference between the natural and supernatural characters, as there is certainly more energy imbued in some of the supporting cast.  Colorist Gabriel Cassata adds a level of darkness to proceedings that suits the title character and the darkness that he must battle.  Finally, letterer Ed Dukeshire gives the book an easy going feel, a real skill considering, at times, how few words are in this issue.

This book is evocative of the show that sired it; with Bryan Edward Hill it has writer that is more than capable in delivering the goods.  Coupled with Gleb Melnikov’s fantastic art, this series is off to a great start.   Just please don’t bring Lorne in anytime soon .

By Al Mega 5 mins ago

By Al Mega 9 mins ago

By Johnny "The Machine" Hughes 17 hours ago

Experience Alan Moore and Eddie Campbell’s FROM HELL,Fully Restored and In Color for the First Time!