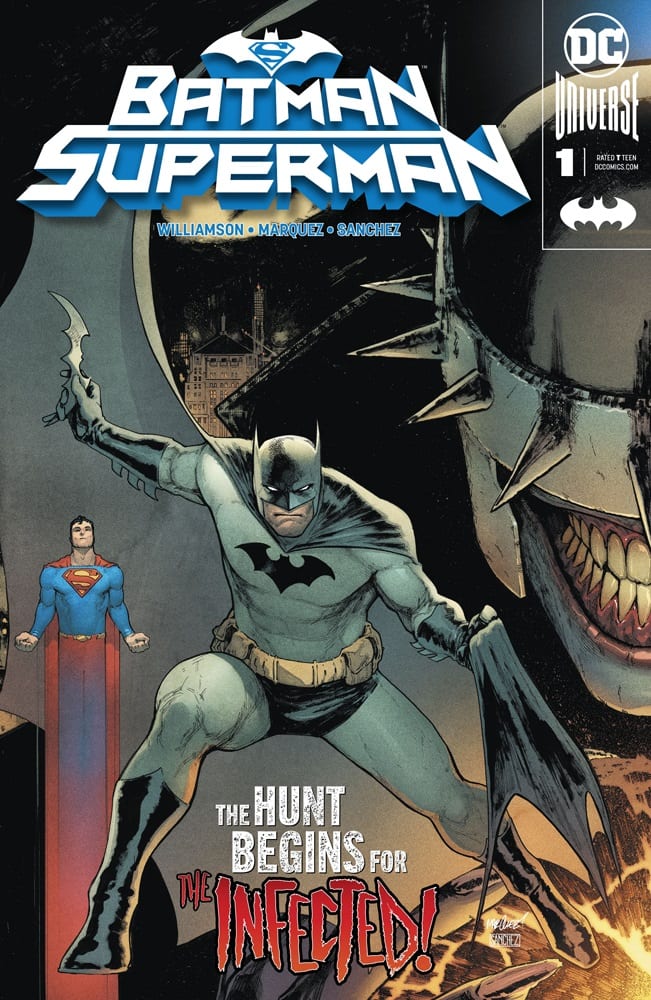 The powers that be at DC have decided to go a tad “Back to the Future” with this new book, in more ways than one, as Batman and Superman team up for their own book…….. again!  Whilst the history of this book can be traced all the way back to the New York Worlds Fair #1 in 1939, it was probably under the World Finest banner, during the Bronze Age, that these two would consistently collaborate on threats bigger than they could manage themselves.  In the modern era we have had a number of Batman / Superman series, including the Earth 2 version of the pairing.

The Batman Who Laughs, AKA The Batman Villain Used as a Joker Proxy because everyone is sick of the Joker, is the reason that these two opposites are attracted in this case.  A missing boy, brings Superman to Gotham and along with the Dark Knight Detective, the pair go a rambling on a rescue mission, only to be confronted with a deadly threat; it seems that the Batman Who is The Joker has more of his serum and plans to infect other heroes.  Who is the Laughing Six?

The book is written by Flash scribe Joshua Williamson, who after having Flash and Bats team up a couple of times, is no stranger to the idea of partnerships.  Here, the threat is pretty standard, if you think about it and plays into the “seen it before” vibe of the whole premise.  Point one; Williamson has two monologues running at the same time in an effort to show how similar and dissimilar the two main characters are.  It’s all well written, but it is such a shame that I have seen this so often already.  Cast your mind back to the double date issues of Tom King’s Batman run prior to the wedding.  Point two; the idea of heroes being infected by the Joker last raised its head back in Scott Snyder’s Batman run, prior to James Gordon becoming Batman and was a key component of the recent mini-series featuring The Batman Who is the Joker. With these two facts, I am afraid that no matter the shocks in the issue, and for some the shocks will be big, I just can’t get excited over a rehashed book, with a rehashed monologue and rehashed plot device.  It also doesn’t help that the deduction of the evil Batcave feels lazy.

The saving grace of the book is possibly the art by David Marquez who I suggested on the recent Definitive Crusade Podcast had more of a house style of art.  Looking over the book, I think I was probably being a tad harsh.  Marquez manages to give the heroes a clean, classic cut;  there are panels of Batman looking scary and Superman looking, well super.  Throw in some horror prologue panels and you get the sense that this book is supposed to be dark and scary.  Alejandro Sanchez is certainly on the same page as Marquez.  The colors, even on the classic outfits is morbidly muted; its as if the dirt and grime of Gotham has actually infected Superman.  John H. Hill supplies the letters and probably had some fun matching the entwining inner monologues.

Back when the first Batman/Superman book hit the racks, it was a companion piece of sorts, with stories that felt part of the continuity of  both characters; think back to Public Enemies bringing them together or the reintroduction of Supergirl.  These elements served to tie the pair together.  Nowadays we don’t have that.  In its place is a book that has no bearing on any continuity at all.  It is as if there are unofficial multiple Earths being used to stage these books.  How can Batman, who is currently broken and battered and exiled from a Gotham in which there is no Gordon in his own book, be perfectly fine in a Gotham not ruled by Bane? Oh and by the way, I haven’t forgot that this isn’t the Superman that this Batman knew after the end of New 52!

C’mon DC, try harder; I don’t just buy a book because it has Batman in it.

By Daniel Clark 5 hours ago

By Lucas Fashina 6 hours ago