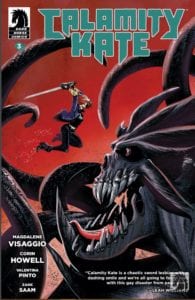 So I’ve read a couple of issue’s of Calamity Kate and decided to hold off on reviewing it because I wanted to see where it was going.  I didn’t want to rush in and provide a critique before seeing what vision the creator, Madalene Vissagio (Eternity Girl, Dazzler: X Song), intended.  That said, I’m glad I did.  Leah Williams provides a nice tag line for the series when she stated that “Calamity Kate is a chaotic sword lesbian with a dashing smile.”  What’s left out of that particular line is that this lesbian sword woman is all about establishing herself as a super-hero monster hunter.  Which brought me to my dilemma, why make a point in pointing out that she is a lesbian?  Does it matter?  Is it germane to the story?  Does her sexual preference figure in the story at all or is it mentioned solely to get points for whomever is scoring such things?  The answer, with issue 3 of the series, is that it most certainly matters.  Instead of being a story about a monster hunter who happens to be a lesbian, it appears that this is a story about a lesbian that happens to be a monster hunter.

So, that may not seem like much of a difference but it makes all the difference in the world to me.  When I read Lord of the Rings the main character, Frodo, has no sexual preference as far as I can remember.  Samwell has one because he eventually settled down and married Rosie.  Same for Pippen, Merry and Aragorn.  But that little piece of personality didn’t mater to Frodo’s story.  If JRR Tolkien had wanted to have Sauron torture Frodo with the shame of hiding his sexuality or some such thing, that personality trait would have been of prime importance.  That didn’t happen and so it was never brought up.

I say this because I believe that too many stories, shows and movies are trying to pigeonhole diverse characters in place simply to have them there.  In my mind that is disparaging and disrespectful.  If you are going to write a trans character or a gay character please make that trait a part of their story rather than make that trait a hook on which to hang some sense of pride.  That’s why I enjoy this book so much.  Kate’s struggles are part and parcel of her identity as a lesbian.  She also has had a troubled relationship, a fact we get to see during different flashbacks in the issue.  Her sexuality, her problems in her relationship, her job status, etc are all part of her personality and form a unique and fascinating portrait of a troubled young woman looking for a place in life.  Instead of being a wanna be super-hero, she is a woman looking to make a mark, cement her place and feel relevant.  I get the sense that part of this may be tied to the rejection she suffered at the hands of her wife, an abusive woman who delights in tearing down Kate and informing her that she is inferior.  Kate is a disaster waiting to happen, hoping to achieve glory or achieve suicide by monster.  This fact is never more evident than when she presents Jade, the young daughter of one of her friends, with a katana so that she “would have something to remember her by”.  This is nuanced and layered writing.  This is a story about a young woman and her journey that just so happens to also be a tale about monster hunting.  I love it. 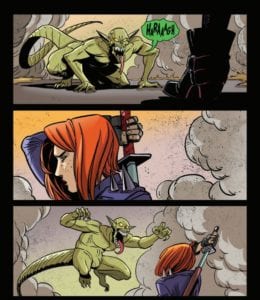 For what it’s worth, the artwork by Corin Howell (Batmite, Dark Red) is adequate but I think it falls short of the standard of the writing.  The art is incredibly simple and cartoonish in it’s presentation.  Likewise, the inking is very light to non-existent giving the whole book a flat, weekday cartoon appearance that is in stark contrast to the material being presented.  There is nothing wrong with that particular style but I don’t believe that the marriage of the writing and the artwork works in this instance and it degrades from the fabulous story being told.  Likewise, the color, by Valentina Pinto (Dejah Thoris, Star Wars Adventures) works in sync with the artwork.  In that regard it is very successful, using two tone shading with very little blending.  This further enhances this cartoonish style and large swaths of solid black ink for shadows further underscores this impression.  If this were, for instance, a Stephen Universe book I think the art would be very good but sadly it is not.

All in all this is a solid book with incredible writing.  I wish the artists had gone a different direction but their execution of their chosen art style is professional and that is reflected in my grade.  This is definitely worth a read and I encourage you to take a look