Captain America’s redemptive arc continues in Captain America #5, part of the
“Winter In America” story arc.  It’s difficult to watch Steve Rogers struggle to redeem himself in the eyes of the public after the notorious words and actions of his doppelganger.  Months later, I’m still shaken as a reader by the infamous “Hail Hydra” moment.

Captain America #5 begins with an establishing shot of Alexa Lukin and Selene Gallio (The Black Queen) seated in a limo.  As they discuss the “Power Elite”, workers outside are excavating the grave of Alexa’s husband, Alexsander Lukin, killed by Agent Sharon Carter.  The two woman discuss America’s vulnerable state following the betrayal of the fake Captain America and it’s subsequent subjugation by Hydra.  Neatly summing up America’s vulnerability to “useful idiots” at this moment in time; Alexa Lukin proclaims, “Saviors, Sinners, Heroes, Villians, What is the difference now?”  Alexa and Selene settle on their “useful idiot”, General Thaddeus “Thunderbolt” Ross.

Flash forward in time, Sharon Carter has been captured and transported to a mine in Albenia where she is a captive of Alexa and The Black Queen.  Carter was initially captured after departing on a mission ordered by General Ross.  Captain America, eager to save her, assaults the mine before the two women can complete whatever it is they intend for Agent Carter.  Much of the rest of the issue is Steve Rogers inner monologue as he assaults the base and its defenders, to include Taskmaster.  Fighting his way into the laboratory where Sharon is being held, 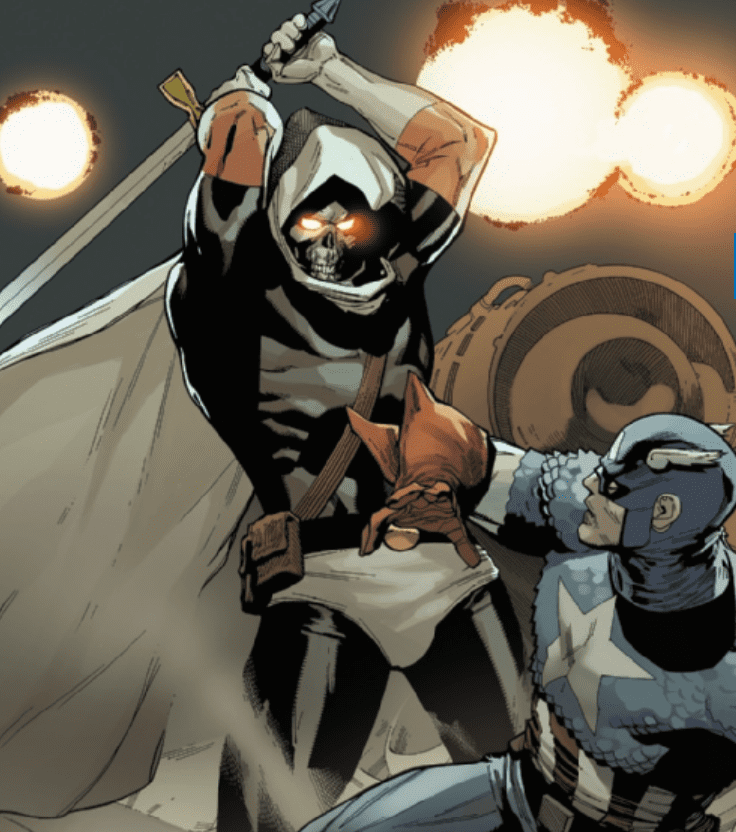 Alexa and Selene flee and leave Captain America with the now rescued Carter.  Returning home, Rogers finds that all is not as it seems and the reality he has experienced is not the same as the reality everyone else is reporting.  This leaves him vulnerable and confused as he discusses this situation with The Winter Solider, Bucky Barnes.  Captain America #5 ends with the surprise return of one character and an insidious tease at the return of another.

This issue is an important step in the unfolding story arc which is “Winter in America.”  The  dialogue between two of the masterminds in the “Power Elite”, Selene and Alexa, is shrewd and pays forward the idea that a weakened United States is vulnerable to the Machiavellian manipulations of international power players.  The battle between Taskmaster and Captain America is adequate, but not really the star of this book, as it seeks to tighten the web of conspiracy and controversy around Steve Rogers.  The cover art by Alex Ross (Justice, Kingdom Come) is fabulous and worth the price of admission all by itself.  Not to be outdone, the interior artwork by Leinil Francis Yu (Secret Wars, Wolverine) is every bit the equal of the enticing cover.  Ta-Nehisi Coates’ script is insightful, sinister in its plots and everything one could hope for from a Captain America book.  In short, the book was fantastic and one I hardily recommend.