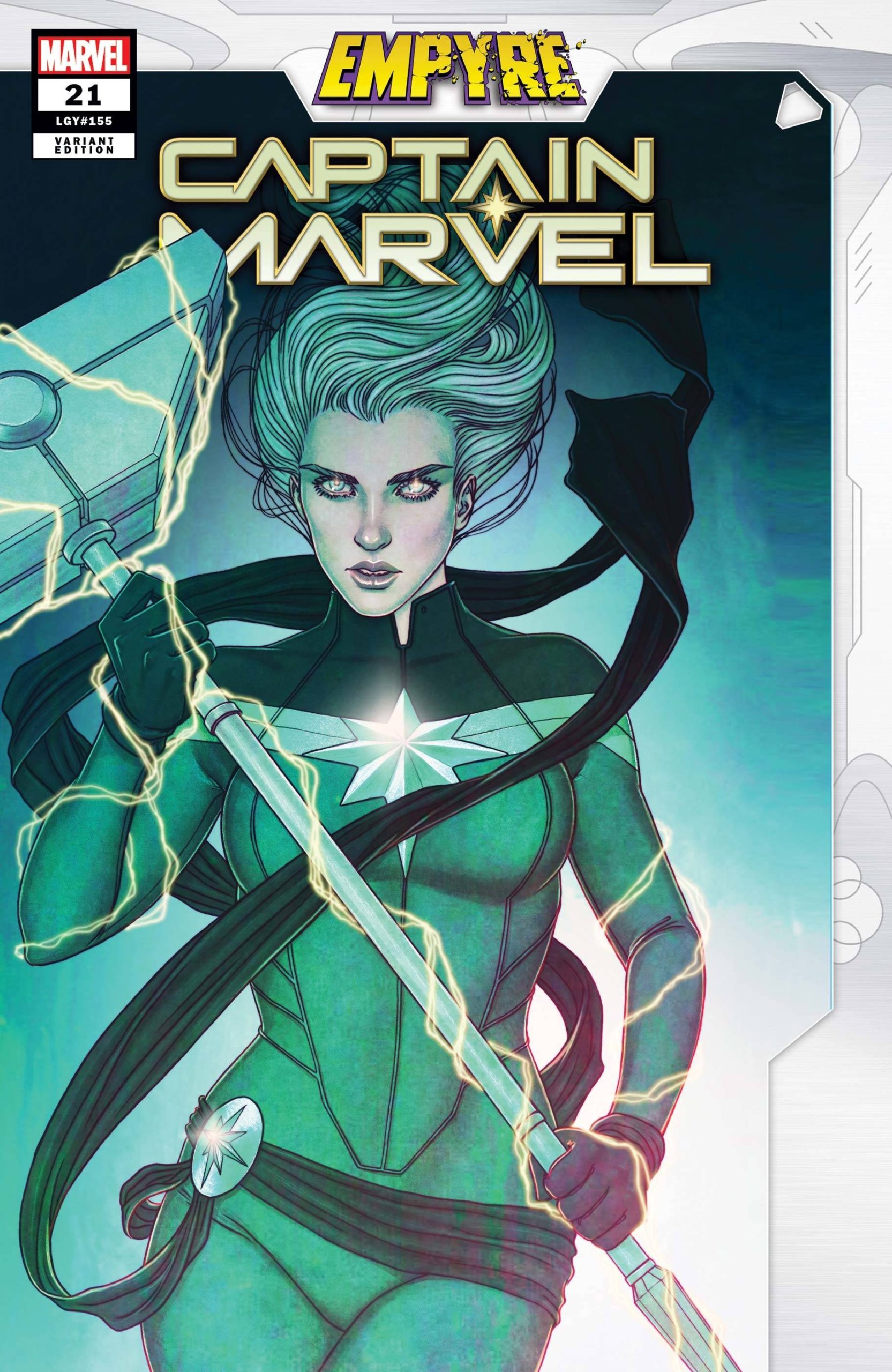 Carol’s involvement in the whole Empyre, at least in her own book, comes to an end this issue.  Its been a fun little sojourn but I am ready to get back to regular scheduled programming.

The Cotati are making a nuisance of themselves in good old New York.  With the Fantastic Four and Avengers busy it falls to the newly found sister of Carol, Lauri-Ell, to save the day and the neighbours kid to boot.  With the fearsome foliage giving Lauri-Ell more than a green finger to worry about, it’s time for the Accusers to Assemble, in more ways than one.

Writer Kelly Thompson is in complete control of a character she loves.  Over time, she has crafted a whole family, be it real or pseudo, for Carol.  By doing so, it humanises her in much the same way Lois and the Daily Planet crew used to do for Superman.  The book’s action is centred around the team and the banter between the gang.  One of the things that annoy me about Marvel at the moment is that many books feel the need to emulate each other.  Yes, I get it; banter and fun works for some books, but the over use of this style can give you interchangeable characters with very little impact.  I have said it before, Thompson writes a cleverer more capable Spider-Woman than the one currently on show in her own book.  The impact of having a sister is well played throughout the book and has a decent conclusion of sorts.

Cory Smith sees out his arc with the big fight scene.  Thing is, I prefer to non-action scenes by far.  Sure, War Machine looks imposing and Hazmat looks lithe, but it’s Jess that kind of steals the show, in both good and bad ways.  Firstly, Smith is currently using the previous norm for Jess, meaning she is curvy and at times very spider like.  However with those arachnid moves, comes the risk of odd poses that don’t work and perspectives that don’t match; check out page 15 for an example.  The art is still attractive, with some Terry Dodson vibes coming in towards the end.  Tamra Bonvillain provides another fantastic color scheme which encapsulates the ever changing landscape, be it trying to see the woods for the killer trees or the magics of the hammer, Bonvillain is more than up to the task.  VC’s Clayton Cowles does his usual stellar work, though he is some what challenged by a certain scene towards the end of the book.

Overall, I haven’t minded this little arc.  As I am not reading Empyre, I was a little concerned that these would be lame duck issues.  With Thompson introducing Lauri-Ell, she has given us a sort of “Carol-by-proxy” to keep the readers entertained, whilst Carol is doing her war stuff off panel.  A surprisingly well executed arc.  Well done.