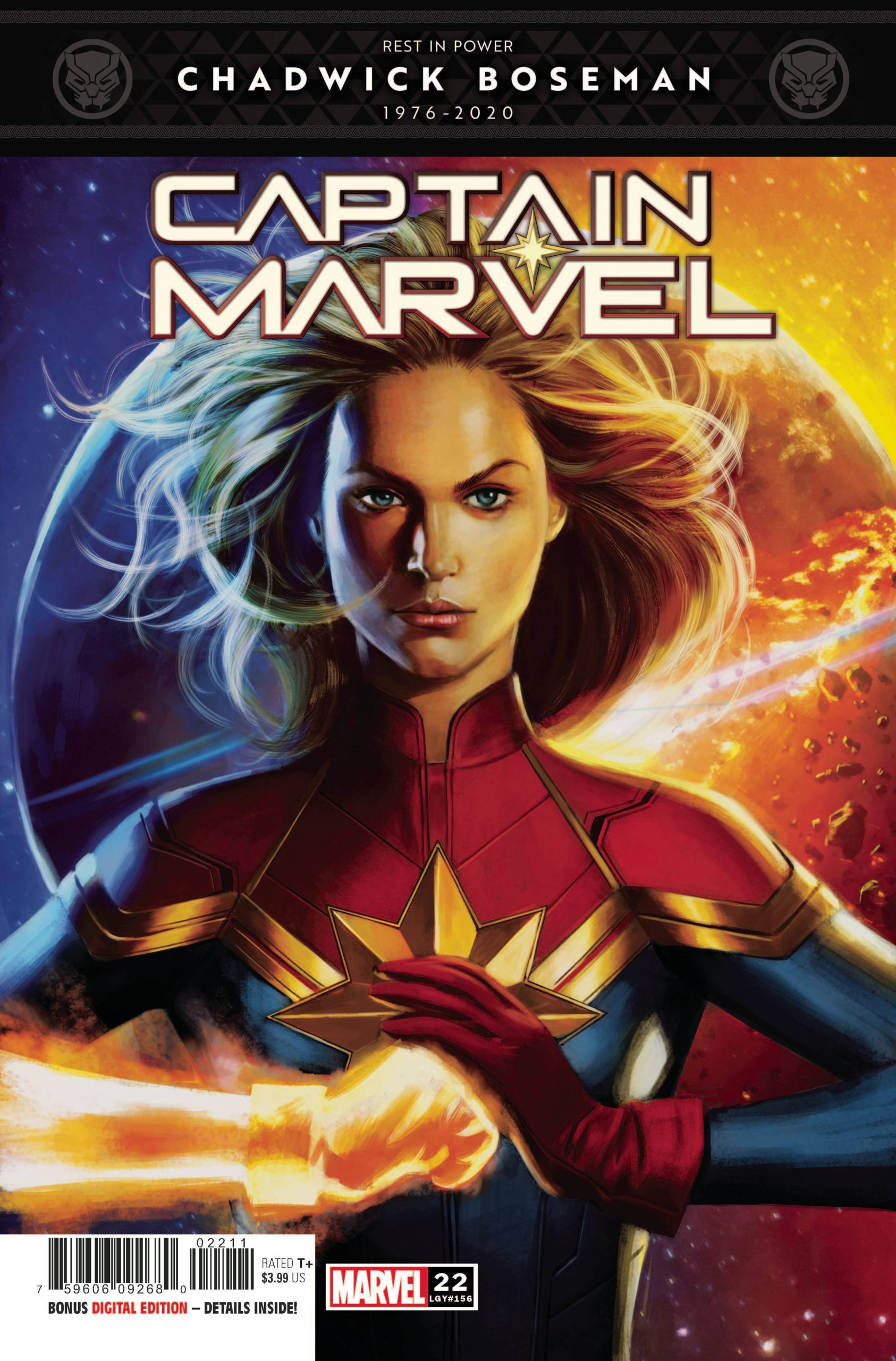 The next new arc for Captain Marvel starts here, with a throwback to a recent special.  You could argue that the story from Captain Marvel: The End and this arc are really Carols’ own “Days of Future Past”; after all, we all know how much Marvel loves a broken future.

There is something weird going on, so the immensely powerful Captain Marvel breaks out her own little fan club  in Spider-Woman, Hazmat and War Machine to investigate.  However as things get wonky, Carol finds herself thrown into the future that she herself tried to help.  Yes it’s time travel Jim, but not as we know it!  This leads to family reunion time, just in time for a possibly big bad to show up.

By now, you should know what to expect from Kelly Thompson; banter between Carol and her gang and a new environment to explore to try and throw the mega-powerful Captain into different frays.  Is it getting old?  Truthfully? Not at all!  Carol’s interaction with Rhodey is fun and I still maintain that Jessica Drew is written better here than in her own book!  Therefore the dialogue is sparkling and the setup is engaging.  I suppose that the only problem with the format is that as fun as the setup is or can be, at some point, Carol will “power” her way out of it.

Lee Garbett makes a welcome return to the book following his stint on the “Last Avenger” storyline.  Garbett has strong lines and a nice knack for perspective.  He also has the ability to draw crowds as well as panels with fewer characters.  In groups, details don’t get lost, like faces.  This is a great talent given how often Thompson has Carol play with others.  Tamra Bonvillain provides another stellar color job, though some could say that it is a touch too dark.  Personally, I like it as when Carol uses her powers, there is a nice contrast.  Finally, letterer Clayton Cowles does his usual fantastic job.

Usual.  This is a word that carries some negative connotations.  This book has been a solid book for quite a while now.  As such it is sometimes hard to appreciate a book that maintains quality rather than excel for periods of time.  But appreciate it you should as Thompson’s familiarity with the character ensures that there is great storytelling in every issue.  Don’t fail to see if for all the other Marvel books, trying to be this good, on the rack.

By Nemesis 4 hours ago

PREVIEW: SOMETHING IS KILLING CHILDREN #12