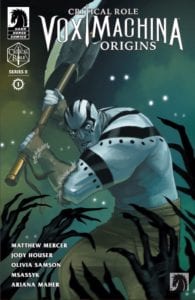 Dark Horse Comics present series 2 of Critical Role entitled Vox Machina Origins.  Written by Matthew Mercer and Jody Houser is a classic sword and sorcery adventure that shares many similarities with the Dungeons and Dragons setting while not being placed in the world itself.   Here can be found established races and characters types that many have come to know and love.  Gnomes, elves, dragon-kin, thieves, druids and rangers abound; but are also joined by new races which provide added depth and intrigue to this story.

As the story opens, a group of adventurers is finishing up a quest before returning to town and cashing in on their success.  It is a familiar formula to those who are players of pen and paper role-playing games or who have read any of the numerous novels in the genre.  While not novel in it’s approach, this opening act of the book is enjoyable and feels lived in like a sword in a well worn sheath.  However, as the companions bed down for the night, one of their number is roused from his slumber and is presumably 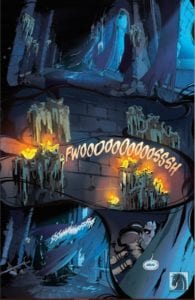 ensorceled in some way as he disappears into the night.  The morning dawns with hangovers all around and it is a while before the group realize that their companion has gone missing.  This is where Mercer sets the stage for future issues as they begin investigating their companion’s disappearance and a barely hinted at back story that is sure to feature more in issues to come.

The story flows very well from panel to panel and the script work done by Jody Houser is commendable.  As a whole, this book is an exceptional piece of comic craft and the story, sequential nature of the comic, and the artwork itself all blend together seamlessly to create a fun and enjoyable experience.  There are some truly beautiful panels in this book and the artwork itself is well above average.  Strong inking and shading lends incredible depth to the artwork in this book, forcing you to look sometimes and make sure that certain characters are not popping off the page.  The color is also well done, with color palettes setting the tone for various monsters and locales.

This is a very good book and a series I intend to follow going forward.  The story is engaging and makes me want to know more both as a comic fan and an avid fan of the DnD genre.  What really sets this book apart is the excellent pacing and layout in the script and the artwork that accompanies it.  All in all this is a book I will be proud to own and one I recommend highly to all of you.