“My men were behind your men.” – Wilson Fisk 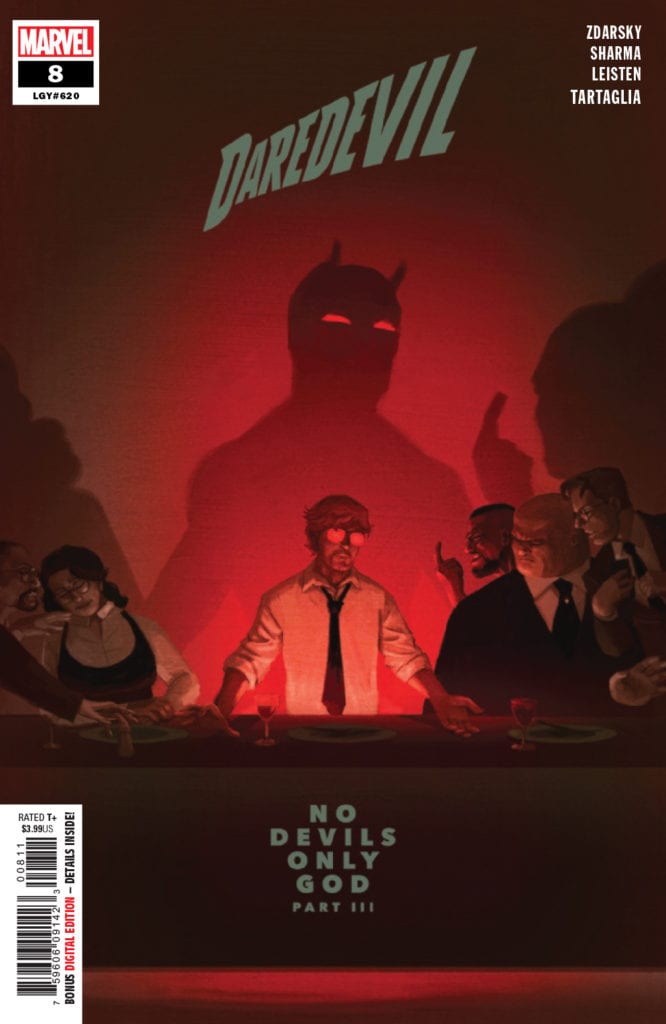 Matt Murdock is shopping for some new brail books and flirts with the clerk at the book store, who winds up inviting him to dinner. He seems to be free from the torment of the guardian devil, but he’s still haunted by his past. In the meantime, Wilson Fisk has disbanded his criminal empire, though he turns a blind eye to other criminal activity. This brings us to Detective Cole North, not about to let criminals slip through his grasp.

Chip Zdarsky opens this issue with the former (yeah right) Kingpin of crime on a hunting expedition with the governor. The topic of discussion is about legalizing a certain activity to see crime go down, percentage-wise, in the big apple. Shady dealings between the governor and the mayor. As we learn neither men trust each other and give an underlying sense of tension to this fine issue. While this is going on, we learn that Matt is a dinner guest of another family who has a past of their own, and not a good one. This isn’t an action-packed issue but it is an intriguing one as we see the powers that be are planning something big. Matt is also playing a game of cat and mouse with his host and it looks like tempers are going to flare soon. I’m enjoying where this tale is going. Great stuff includes the degree to which the governor and the mayor distrust each other and the slow revelation of Matt Murdock’s dinner hosts and just how busy their past was.

Sharma and Leisten bring an everyman quality to Matt Murdock which works well since Matt gave up the hero business and just wants to deal with the issues in his life. Most comic book creators draw their villains to look evil and twisted while their heroes are physically attractive. But we know that Ugly on the inside doesn’t always equal ugly on the outside, one only has to look at Ted Bundy, Bugsy Seigle or Karla Holmoka to realize that the face of crime isn’t always scarred and it’s the attractive faces among us that create a more shocking reaction when we realize what animals they are. This average looking family that invited the man without fear to dine with them are more terrifying because they don’t look it. Highlights include a surprise attack at dinner and the arrival of another hero.

This comic is great because it goes against convention for what you would expect in a superhero comic. There’s no action scenes and very little violence, but yet the information presented here make us yearn for the next issue. It’s a simple tale of the governor and the mayor on a friendly hunting trip and Matt Murdock being invited to dinner. But it’s the undercurrents that keep our interest. We learn the dirt behind this average “family” and wonder if Matt will even be allowed to leave this home, especially with one of the tough family members becoming angrier at Matt’s accusations. Awesome issue, I can’t wait for the next one! *****

Review: Transformers vs The Terminator #4