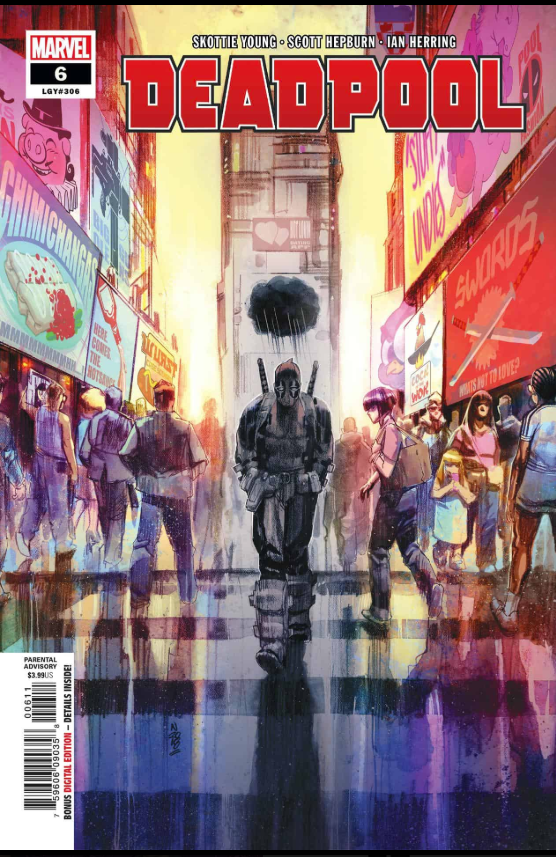 Deadpool #6 flips the script on Wade Wilson and has him hunted by an unknown enemy as he suffers through a temporary bout of the doldrums.

<Deadpool:  Are you really going to start my review that way?  God!  I’m half asleep already and you hit me with DOLDRUMS!  Pick up the slack Howard!>

Uhh..yeah right.  So as I was saying, Deadpool finds himself depressed and wondering what the point of it all is when he is texted by his partner, Negasonic Teenage Warhead.  As he texts back and forth with her, stuck in his malaise, he is targeted through the scope of a high-powered rifle and his phone is shot out of his hand.

Prepared to end it all, Deadpool steps to the window and presents himself as an easy target.  In what would be a continuing theme throughout the book, a superhero sweeps down and foils the plans of the criminal who sports an eerie mask with a huge smile plastered across it.  In this particular case it was a superhero team, The Fantastic Four.  In a subsequent encounter, Wade is saved by an alien ship which abducts the criminal.  Yet another encounter is interrupted by  the sudden appearance of Dr. Strange.

<Deadpool:  Come on man spice it up a bit.  Give us a Bam! or Boof!  You know like that sixties TV show featuring he who must not be named.>
< Howard:  Stuff it Wade!  This is a review so give it a rest.>
<Deadpool:  Touchy.  Keep going hotshot.>

Finally Wade (you know I’m looking at you Wilson) has had enough and makes his way to a bar to drown his sorrows.   Undaunted, the villain makes yet another appearance and gets the drop on the despondent Deadpool

Resigned to his fate, Wade takes a final drink and then prepares to meet his maker.  As the criminal monologues, one of his revelations snaps Deadpool out of his funk and restores his zany humor and lust for killing.

<Deadpool:  Bwahahahaha!  Tell ’em what happened.  Come on you know you want to.>
<Howard:  No.  They have to get the book to get all the details.  Now can I finish this?>
<Deadpool:  Buzzkill.> 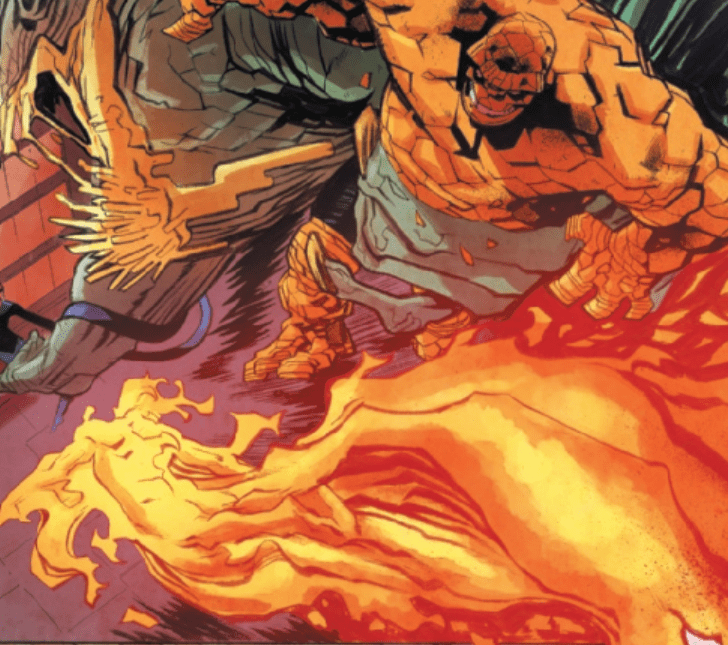 Wade walks off, his mood restored, and texts Negasonic that everything is once again right in the world.  With that, the issue ends and we are presented with a preview for the next issue as Wade stalks up behind Santa Claus, katana in hand.

This issue of Deadpool had laugh out loud moments and the cameo appearances were well done and top-notch.  Although I have no complaints about the book, it earned a four for this simple reason; while it was funny and novel it was rather straightforward and lacked a surfeit of action and one liners.  I need that in a Deadpool book for it to get above a four.  However, for what the book presented it was very well done.  I enjoyed seeing a day in the life of a despondent Deadpool and the ending of the book was on point and true to form for the Merc’ With A Mouth.   A worthy addition to the Deadpool collection and I look forward the his assault on the man in red next month.

By Johnny "The Machine" Hughes 35 mins ago