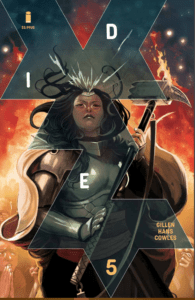 Die #5 by Kieron Gillen (S.W.O.R.D., Warhammer: Crown of Destruction) and Stephanie Hans (Black Bolt, The Wicked + The Divine), sees the duo team up once again to close out this opening story arc in the mysterious, engrossing and, at times, disturbing new series Die.

Five issues ago, Gillen introduced us to a group of children who, after sitting down to play a role playing game, disappeared from our universe for a period of two years.  When they returned, one member of the group was missing an arm and another was missing altogether.  Fast forward a few decades and this group of people are brought together again through circumstances out of their control.   As is normal with many who are childhood friends, this group of people had separated.   Though they were bound by a secret tragedy, they had never talked about it to anyone and had instead taking on the normal and sometimes pedantic lives of common people.  Their reunion shatters that reality and propels them back into the world they escaped so many years ago, reappearing in the forms of the teenagers they had been then.  Waiting for them is their one-time friend, now calling himself The Grand-Master.  It had taken him a while but he had found them, pulling them back into the game he was still playing. 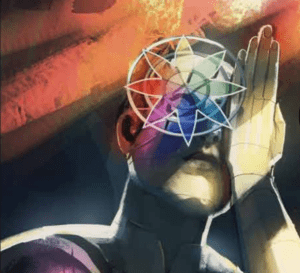 Over the last four issues our group of friends have gone from battle to battle, seeking a way to once again escape this world while struggling against their seemingly insane former friend.  They have encountered undead horrors, techno-fantasy dragons in a World War I setting and more.  Now they have made it to the City of Glass where they have a plan to defeat The Grand Master and return to reality.    I can tell you that they do emerge victorious but the rewards of victory are not what they anticipated and the costs of victory are steep.  Those costs are sure to feature in the next story arc for this excellent series and the rewards are sure to scar this group of friends for some time.

Gillen’s writing on this series continues to impress.  On the surface, this is an escapist, adventure, fantasy story with a horror twist.  However, Gillen has masterfully woven in any number of sub-plots and commentaries.  On the one hand his, writing holds up a mirror to industry and militarization while at the same time commenting on the new age of cyber warfare.  At the same time, he has crafted a complex tale where the social interactions of the group are nuanced and their competing interests and points of view are always well represented.  Each character has a class which describes them.  However, instead of defining them and boxing in the writer, the class is a template that allows for character growth while being guided by a defining characteristic that is true for each character in this role-playing world as well as the ‘real’ one.  Not to be outdone, Han’s visuals are outstanding.  Each issue in this arc has been beautifully

rendered and the use of color in the book is amazing as it sets the tone for the disparate areas of this fantasy realm.  Showing true versatility, Han’s has not only  had to draw moments of fantasy or high adventure but also moments of true horror.  One panel in this book evokes images of the Dark Judges from 2000 AD and I don’t think I could give much higher praise than that.

This is another fine book in a wonderful series.  Gillen and Image plan on taking a hiatus with a trade planned for June and the next story arc not starting until October.  In the meantime, I highly encourage you to pick up this book and this series, you won’t be disappointed.