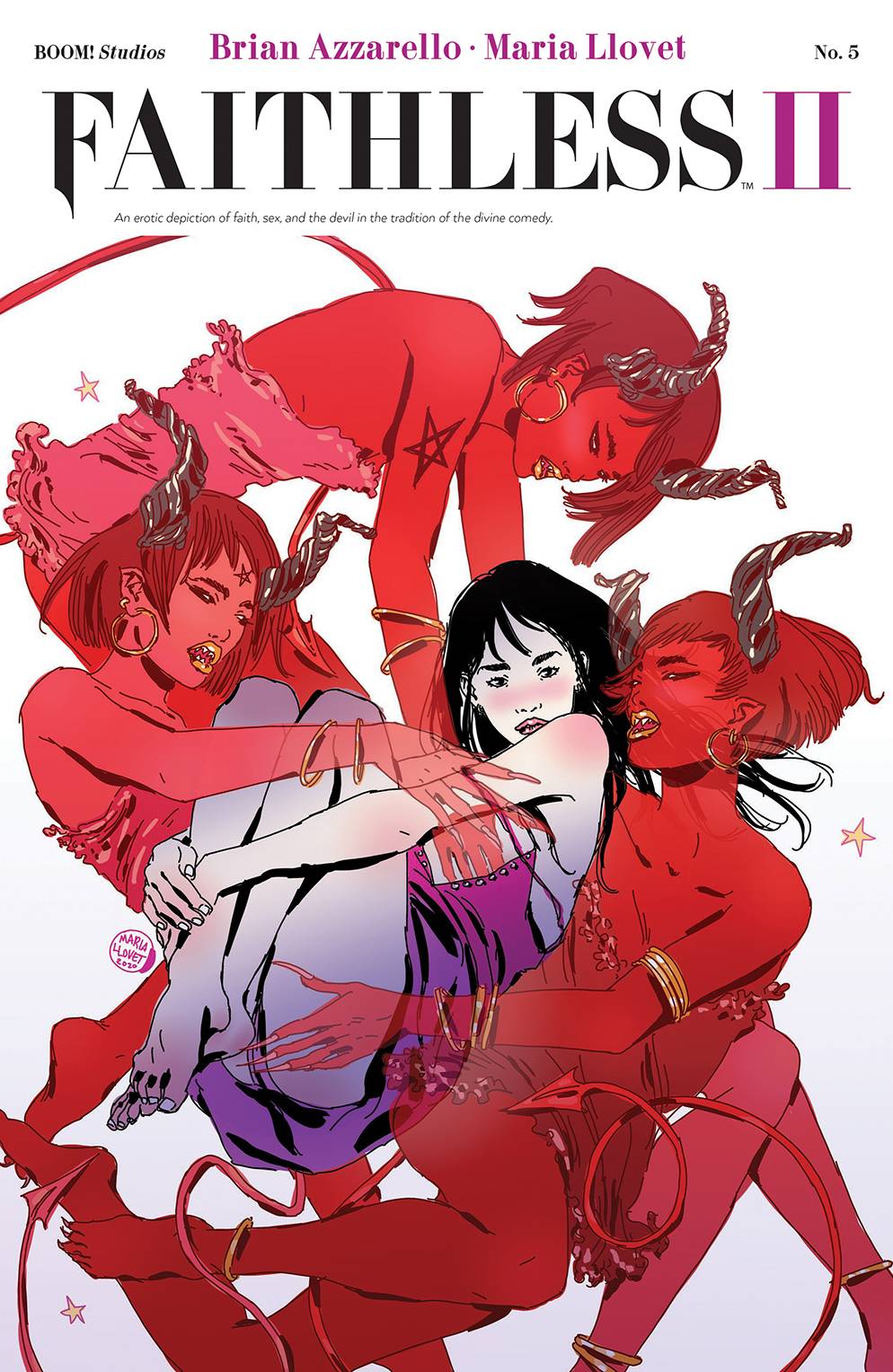 It’s been a while since I checked on every-bodies favourite lesbian and devil’s succubus, Faith.  Guess what, not much has changed.

Brian Azzarello’s “erotic depiction of sex, drugs and the devil, in the tradition of the divine comedy” continues to push the boundaries, this time around has he gone too far?  At this point there are not too many taboos left fur Faith to partake in.  Sleeping with Poppy and Poppy’s father, with Poppy as well probably pushed a lot of boundaries for readers.  This time though there is morphing. phallic imagery to go along with the menstrual blood letting for kicks.  By now, readers will recognise the beats of Azzarello’s storytelling; sex, relationship and dire warnings all before the cliff hanger ending.  Whilst the book is still enjoyable, I do feel that it has meandered a little too long and I find myself not that bothered in the outcome for Faith of Poppy, never mind the extra characters that have been introduced this time around.

Whilst Azzarello may seem to by running in the same spot, Maria Llovet continues to deconstruct the art, literally and figuratively.  With sex being such an important part of the overall story, Llovet does not shy away from it, letting her imagination and her pencils run away with her.  The results can be unsettling at times and is a massive contrast to the normal parts of Faith’s life.  There is still an edginess to proceedings, a kind of rough around the edges approach which has never gone away during either runs.  Colors are a, thankfully, muted affair, no massive bright elements, it’s pastels all the way around, which helps demonstrate the effects of the drug that Faith takes.  AndWorld Design provides the letters which is as scratchy as the pencils are rough.

Both runs of Faithless are advertised as in the 000tradition of the divine comedy.  After reading this latest issue, I think that there’s another major influence on display; the TV show Lucifer.  True, this book has more sex and eroticism shown with courage and without apology than Lucifer but there is a love interest, there is the devil and a cast of characters up to no good or good depending on your point of view.  I do feel that we have lost the way a tad in this run; there used to be touches of magic around Faith which seems to have dried up.  Even with interest waning, the book is still one of the most readable from a quality perspective.

By Nemesis 13 hours ago