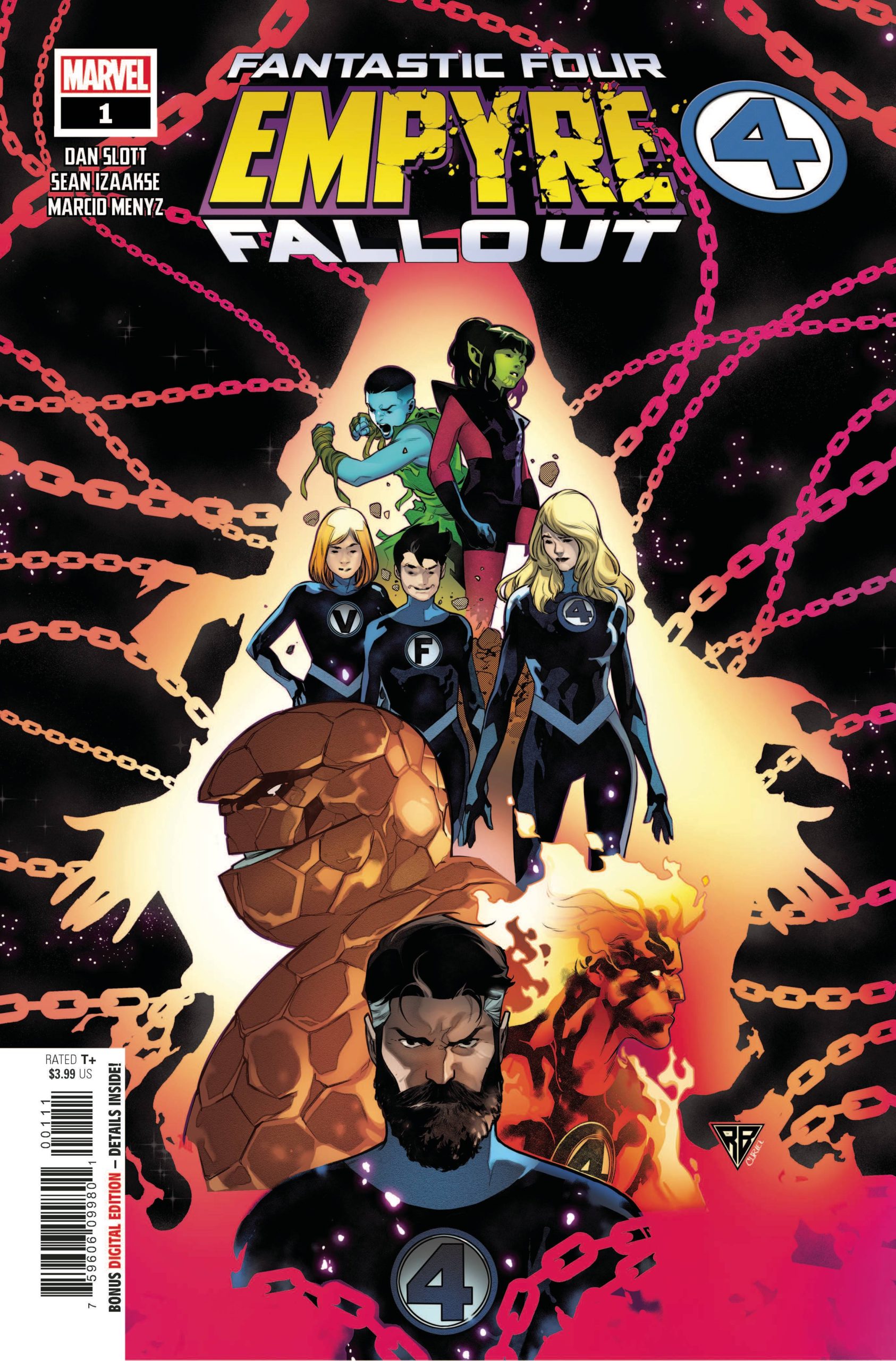 The end of any crossover can bring about true change or simply kill or resurrect a character. Fantastic Four Empyre Fallout gives us an incredibly genuine and interesting change to the status quo and then ends with a resurrection.

The plant-like Cotati have been defeated and the United Kree and Skrull gather with the Avengers and FF on the Blue Area of the Moon. The Unseen narrates and observes in a Watcher-like fashion. He states this all begins and ends with the children, and the story centers around the fate of Jo and Nicki who represent the Kree and Skrull heritage. After helping to end the bring an end to the war, the children arrive with Franklin, Valeria, Spider-Man and Wolverine alongside them.

Dan Slott deftly hints at their final fate with Ben Grimm mentioning how much of Franklin and Valeria’s childhood he missed out on and with the children taking up Alicia’s attention. There is some solid humor throughout the issue including an homage with Scooby Doo with the Cotati ruler mumbling about being foiled by the children.

Iron Man identifies that the Cotati weaponry is unexpectedly advanced and brings in the villainous Profiteer to examine them. Thor and Franklin takes the Cotati to a new world and Thor uses the power he gained from Gaea to make the world verdant and habitable. Since it is completely remote and completely plant based it is the perfect world for the Cotati.

Reuniting back at the Blue Area of the Moon the team recalls the many times momentous occasions happened there. Spidey and Torch have a nice talk about relationships even as the Profiteer reveals limited data about the ancient weaponry before demanding Jo and Nicki back as per her contractual rights. The FF and Avengers prepare for a fight but then Hulking as the Emperor of the combined Kree/Skrull people declares the contract void.

Hulking then wonderfully asks Ben and Alicia to adopt the two children. As our heroes leave, The Unseen discovers the weapons come from The First Race with the weapons then resurrect from within him The Watcher. The Watcher does not look pleased and warns of a reckoning to come.

This issue is immense in its consequences and is a great followup to the crossover. It gives quality character moments throughout and truly shows interaction between our heroes on a personal level. The change in Ben Grimm and Alicia’s life is done perfectly, as they clearly have limited opportunity to have children. Nothing seems more perfect than Ben Grimm as a father and Dan Slott clearly understands how central family is to the Fantastic Four.

The art throughout by Sean Izaakse and colors by Marcio Menyz is incredible. The characters are well rendered and recognizable, the emotions are conveyed well and every panel tells its own story. There is a very intelligent use of shadows and even the smaller moments are made interesting. Not every panel is polished but the ones they are stand up to the best artists in the business.

Overall this issue brings a joyful change to the family dynamic and a massive complication in the return of Uatu. This issue certainly gives the title some momentum going forward. Hopefully Fantastic Four is able to build on these changes quickly and continue to entertain and surprise us.