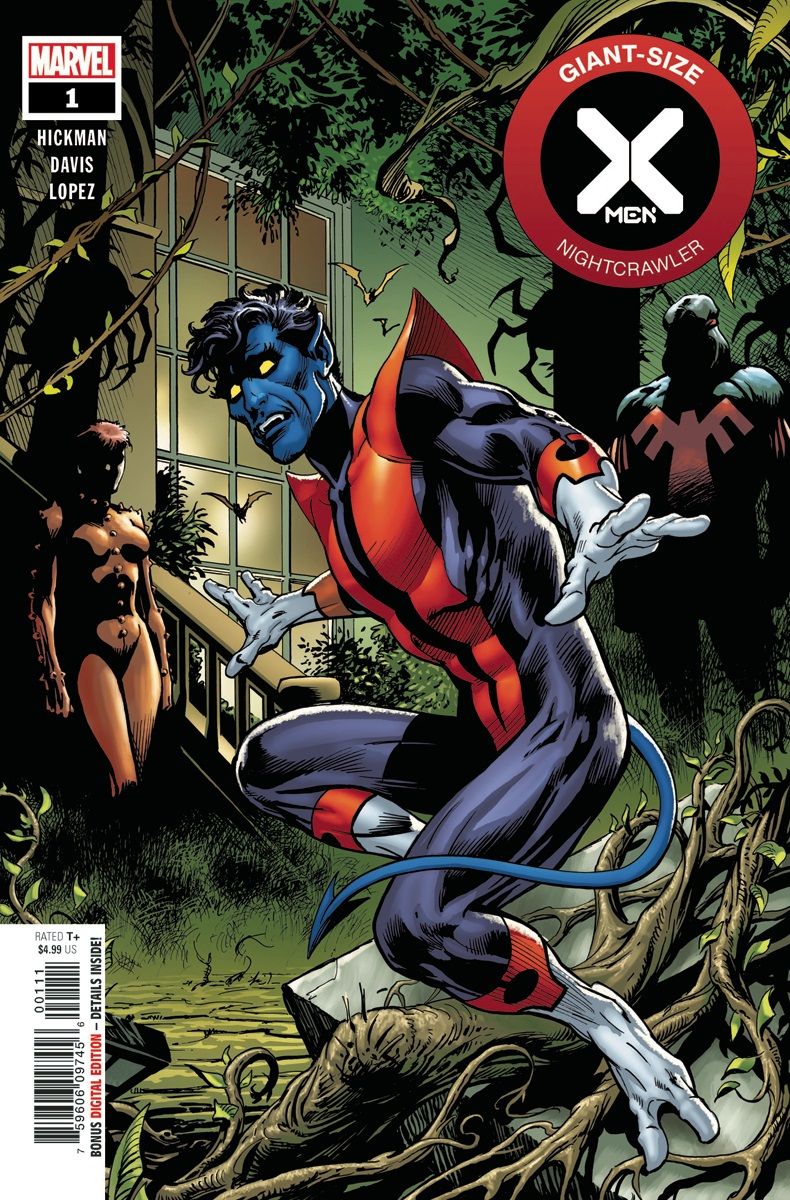 The great delineation of quality quietly meanders its way, insidiously  through the mutant half of the Marvel universe.  This time around we get a giant sized special for a character, that well, hasn’t been special for quite some time, Nightcrawler.  It therefore makes sense that the powers that be look for a creator who has more than a passing affinity with Mr Kurt Wagner.

There are strange readings around the gateway that is located in  the old X-mansion.  Its up to a team of Nightcrawler, Magik, Cypher, Eye-Boy and Lockheed to investigate the shenanigans and find out who is trying to access the gateway.

The book is co-written by current X-guru Jonathan Hickman and long time artist and sometime writer Alan Davis.  The story is quite simple; it is a kind of like an episode of Scooby-Doo in parts, meaning there is a lot of running around, with very little accomplishments made.  As Hickman is on story and words, I do have to ask, did he forget that Nightcrawler is German?  Gone are the trademark “unglaublich” that have permeated this character.  What next? Do Wolverine’s claws still SNIKT? Does Cyclops’ blast still ZZAP?  Thankfully, the BAMF is still there.  Hickman is always seemingly trying to set up future events; this is no exception as there is surprise development that has yet to be explained.

I am a huge fan of Alan Davis, both his art and his writing.  This goes back to before Excalibur, to Detective Comics and Batman and the Outsiders.  Over recent years I have seen the quality wane slightly and I am not sure why.  Even at his worst, which this is far from, Davis is still a classic style artist.  So why does this feel, well, old?  It doesn’t help that Nightcrawler is in his original uniform as are a couple of “guest stars”.  All the Davis foibles are on show, be it the high heels or streamlined bodies.  Furthermore, the lines look heavier than normal; here Davis is inking his own work and has to contend with the strong color choices of Carlos Lopez who looks to maintain the ongoing X-style of colors.  Finally, it’s an X-book so VC’s Clayton Cowles is on hand to deliver another opportunity for readers to try and read the most difficult font in comics at the moment.

Despite the top tier talent on this book, despite the dialogue miscues or the artistic sameness, there is one other thing that is fundamentally wrong with this book.  It’s not actually about Nightcrawler! Sure, he is in there but he plays just as much a part, is just about as helpful as the Krakoan gateway!  The book is about Magik and Doug.  I don’t have a problem if that’s the story that Hickman and Davis want to tell; but have the strength of your convictions and call it Giant Size X-Men Magik and Cypher!  Don’t trade fans love of a classic character as a reason to buy a book in which said character is not the focus!