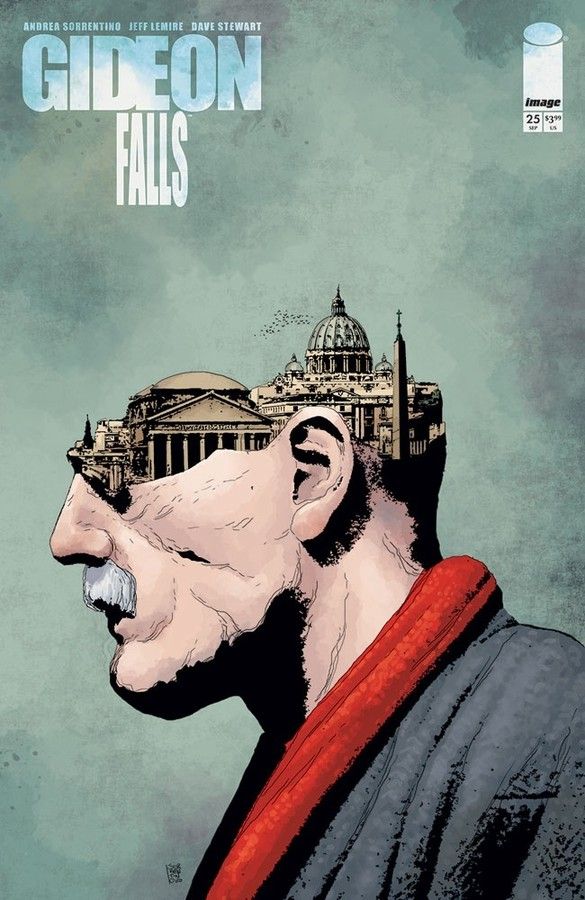 The center narrative of Gideon Fall’s has been the awakening of the Mysterious Black Barn. During the Wicked Worlds storyline a key rule that has been unraveling is that any attempt to mess with or destroy the Barn, you mess with the Fabric of reality itself.

In the current issue of Gideon Fall’s #25: ‘Are You Feeling Sinister?’, Jeff Lemire #1 describes what happened in the millennia leading up to the barn’s destruction, and in effect how the Gideon Fall’s Universe works, how it was born, and how it will eventually die.

The Barn is an ancient, malevolent evil that roamed the part of the cosmos as a primordial god of cosmic darkness. But the key part here, is that it was once part of the natural order of things. One half of a whole. That was until the Darkness started to consume parts of the light. Then things went haywire, which is how life was started, and effused from the Center point of Gideon Falls

So now the Barn/Darkness can take the form of a barn-looking entity, but he can also shapeshift when needed, connected to the abyss. His otherworldly powers include creating and controlling armies of Zombies. The question I now have is what happened to the light side? Is there a God of Light? Might this god of light be just what the doctor ordered to defeat the dark god?

Andrea Sorrentino, took her shot in this one, with beautiful pans eye popping splash pages, and a style reminiscent of Jack Kirby that reminded me of the Negative Zone that appeared in Fantastic Four #51. God Bless her heart for trying to demonstrate a Cosmic Void It’s hard to convey some of these complex ideas, yet Sorrentino makes it look easy. You understand the madness facing Father Fred and how he’s forced to question everything he knows to be true.

Usually I hate explanations for monsters, but here the explanation just makes sense and makes me more interested in the Gideon Fall title. What I don’t care about right now is the auxiliary stuff with some of the main characters.

I remain steady high on the Gideon Fall’s and look forward to seeing it get adapted. Just as strange as Twin Peaks, but with more practicality to it, this should be a series whose #1 issues that people are snapping up.

THE ETERNALS TEAM UP WITH THE MARVEL UNIVERSE ON SHOWSTOPPING COVERS!

By Al Mega 3 mins ago

CAPULLO & MCFARLANE ARE BACK FOR A LIMITED TIME

By Lucas Fashina 16 hours ago