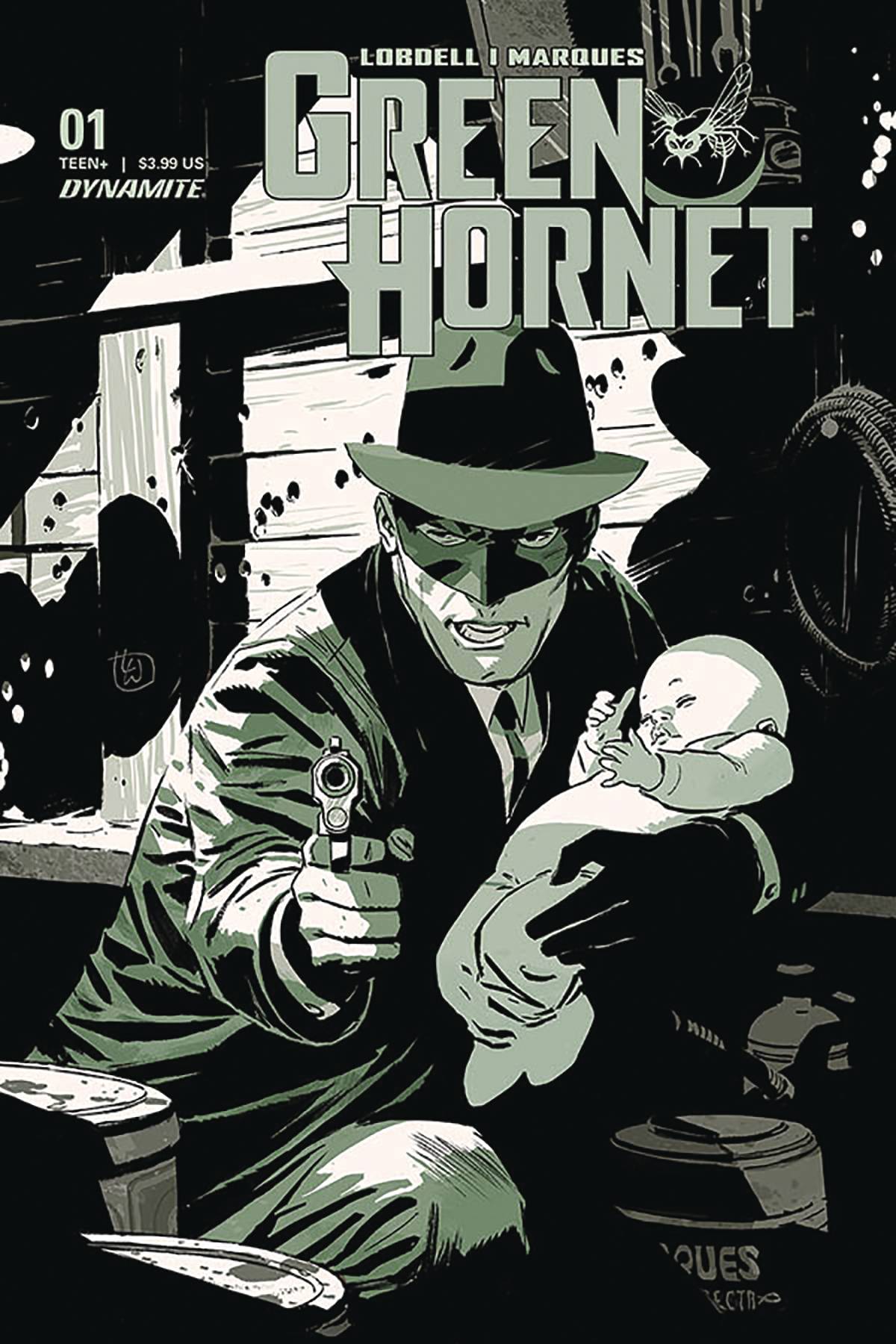 Dynamite’s long established love of yesteryear raises it’s masked head once again as the Green Hornet and Kato start another mission, trying to take the bad guys down from the inside.  This time though, the bad guys are the US army?

Pretty much from the outset, the Hornet is left holding the baby; this is no spoiler, it is right there on the gorgeous cover from Lee Weeks.  The timeline of the issue is that topsy-turvy, cliffhanger first and then look at how we got there type of affair.  Britt Reid, owner of the Daily Sentinel, is missing a reporter.  It makes sense then to not involve the authorities and head of into Kansas in an effort to find her.  Of course this being the first issue there isn’t going to be a straightforward conclusion.

Scott Lobdell is not my favourite writer by a long shot, but surely to god, even he can’t mess up something that seems formulaic, right?  Britt is very much a Batman type of hero, using his money to help people.  The conceit is that he has built his alter ego, the Green Hornet, into a “master villain”.  Looking back at the Hornet’s alternate media past and you have a very strait-laced TV show and a played for laughs movie.  With these two distinct poles, Lobdell doesn’t seem sure to which he should hoist his flag, though he does seem to be leaning towards the humour.  This is a shame for me as I never think of the Hornet as a comedy character.  Also throwing me for a loop are the number of references to other heroes origins; it’s just a little too tongue-in-cheek for me.

The real star of the book, is without question the art and colors by Anthony Marques whose style offers a wealth of influences from Bruce Timm, Darwyn Cooke, Mike Parobeck and Sgt. Rock!  Marques style has a cartoon look which encapsulates the “fun” half of Lobdell’s writing.  The characters are very blocky, broad shouldered with cartoon caricature faces that over exaggerate the emotions on show.  J.Bone adds heavy inks which helps set the frame for the characters and allows them to pop against the monochrome color scheme that Marques cleverly applies, eschewing a full color or even black and white scheme for a green and white. This give the book a unique look to say the least.  Letters are provided by the ever reliable Taylor Esposito who also adopts a focus on green, this time lighter green on dark green boxes; this gives the book a very stylised and professional look.  It is a Dynamite book, so there are a range of variants to choose from.  No disrespect to any of the other cover artists, but you are going to be hard pressed to better the “A” cover by Lee Weeks.

The Green Hornet has a huge following, be it from the show, the movie or the comics, and very much like Batman, there are a number of  ways to tell the Hornets stories.  This then is the choice you have; you like the serious Hornet only, this book might not be for you.  If on the other hand you like the humour that has been introduced into the mythos, then Lobdell, Marques and company may well be in your wheel house.