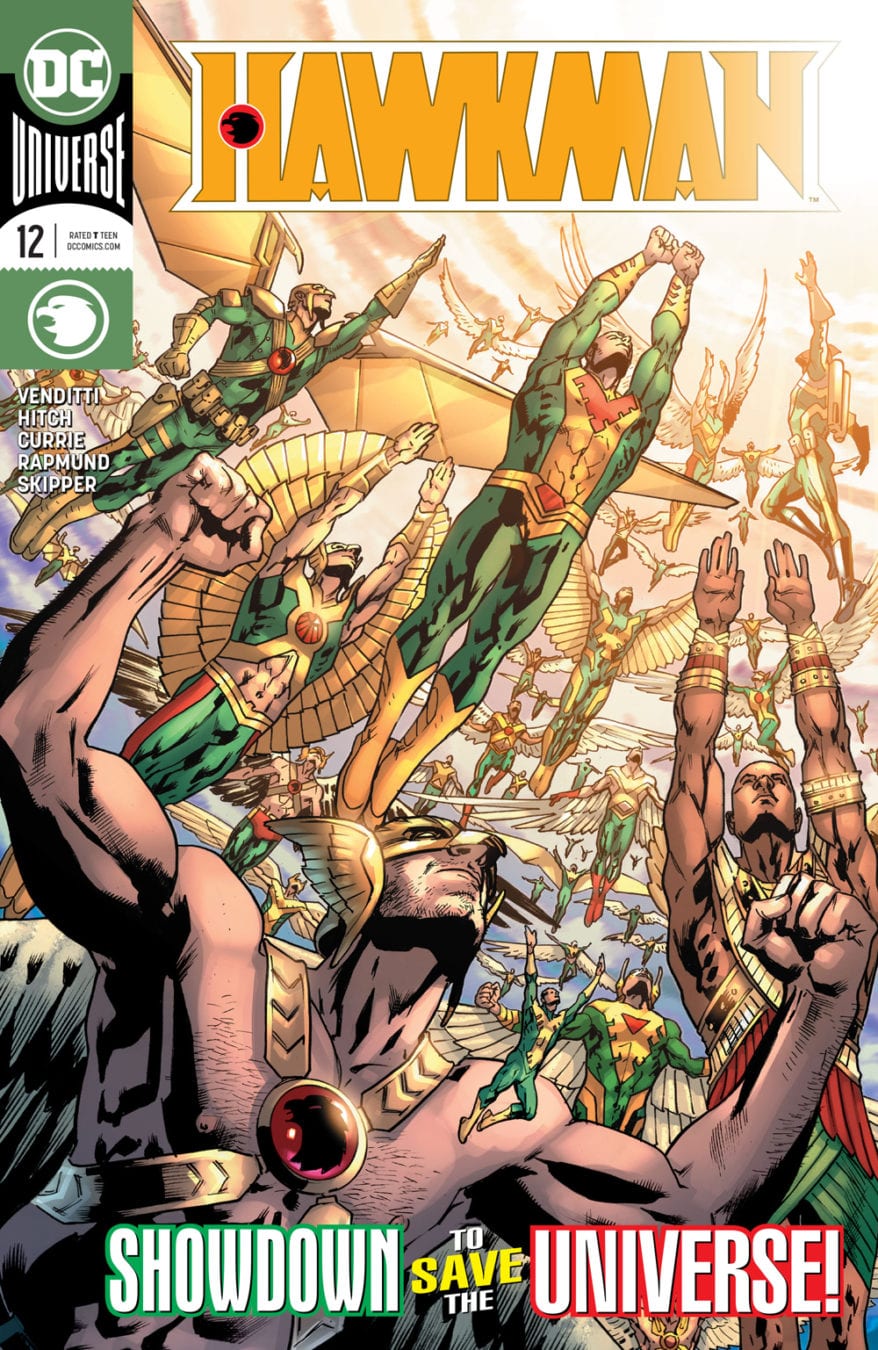 When I was a kid I loved Hawkman. He and his girlfriend flew through the sky on giant wings and beat up bad guys with maces (because… comics). Then when I got older, I tried to make sense of who Hawkman was. Was he a space cop? Was he a reincarnated Egyptian prince? Was he an archaeologist with a bird fetish? The editors and writers at DC kept changing key aspects in an effort to “fix” Hawkman. And still, none of it made any sense.

It has taken 12 issues, but Robert Venditti and Bryan Hitch have done the seemingly impossible task. They have made sense of Hawkman’s continuity. Is he a space cop? Is he a reincarnated Egyptian prince? Is he an archaeologist with a bird fetish? Their answer: YES! Not only is he all those things they added on and made it more complicated. He is a Kryptonian superhero. Not only was he a space cop from Thanagar, but he was one on Raan too!

Not only did Venditti (X-O Manowar, Green Lantern) fix the continuity problems by embracing them; he did it by telling a great story that took readers on a tour of all the weird corners of Hawkman’s history. Doing so, not only straightened out his history for long-time readers, it made it a great and obvious starting point for people who didn’t know anything about him. He also introduced a great new villain for Cater/Karter/Ktar going forward.

I’m not sure if Hitch (The Authority, Fantastic Four, Justice League) had a fantastic time drawing all these variations of Hawkman or if he was on the verge of losing his sanity. But the murmurations of Hawkmen in the skies for the final battle was sensational. Visually, the battle was filled with pop culture references from Star Wars to Man of Steel. I’ve loved Hitch’s work for a long time and so very few artists can depict the end of the world as gleefully as he does. I can see why it took three inkers to keep up with him.

This issue really is a satisfying conclusion to a epic reintroduction of one of DC’s Golden Age characters. Carter Hall comes out if this as a fully realized person. If I have one disappointment in the series is that I was really hoping for a bigger opportunity to showcase Hawkgirl. I get that there was so much to do in the first 12 issues, but I really want more than the occasional help from a character that is almost integral to Hawkman himself. I can’t wait to see where Venditti and Hitch will take us from here.

Sent from the future by our Robot Ape overlords to preserve the timeline. Reading and writing about comics until the revolution comes. All hail the Orangutan Android Solar King!