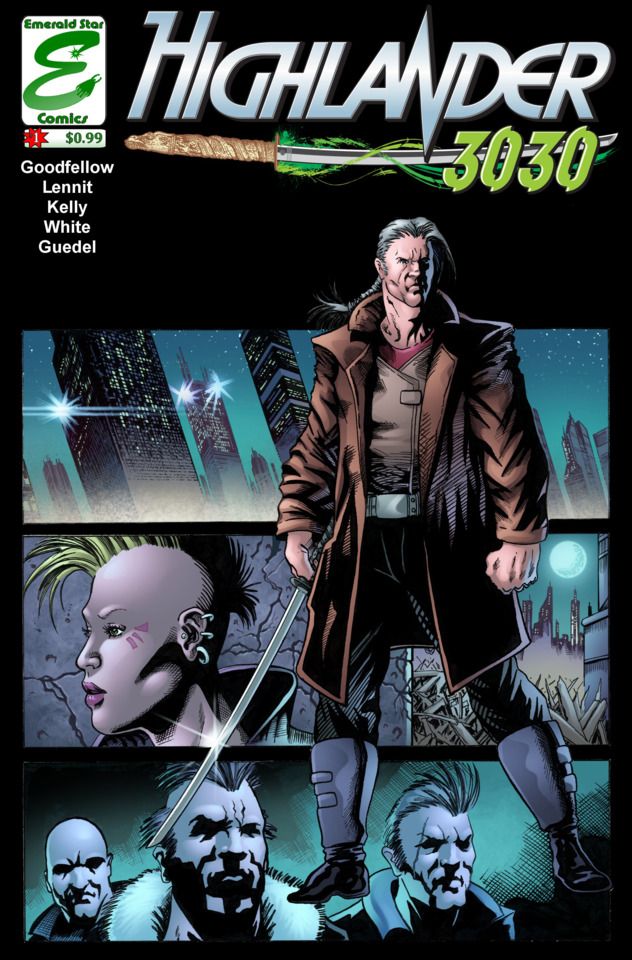 Here’s the thing; either you love the Highlander franchise or you hate it. The way I see it, there’s not much room for lukewarm appraisals of the clan MacLeod. The only real debate is whether you’re more a fan of Duncan or Connor, the protagonists of the TV and cinema versions of the story, respectively. Take Emerald Star Comics’ new spin on the immortals for instance — Highlander 3030 is sure to further polarize an already divided fan base on who is in fact the better Highlander.

This particular incarnation focuses on Duncan MacLeod, and as you may have gathered from the book’s title, he’s still alive and well in the far future. Specifically, he’s surviving as part of a mining colony on Europa, one of Jupiter’s many moons. The rest of his crew know that there’s something different about the the silver-haired loner, but beyond being able to determine that he’s been in the colony far longer than just about any of them, they haven’t nailed it down. Yet.

You should know that outside of using that kick-ass Queen song in the intro to the TV version, I’m much more of a Highlander film fan. That said, I’ve never really had anything against Duncan, it’s just that Connor has always been the Highlander in my eyes. It always seemed as if Duncan was, well, not really a pretender, but a stand in; a placeholder to keep the idea of the thing in the front of the popular conscious until more films were released.

Seen from that perspective, the TV show wasn’t that bad and this book goes a long way in making the case for Duncan as viable and strong standalone character. Given that this is a premier issue, not much of the story is sussed out; like his crew, we’re still in the beginning stages of finding out just who Duncan is at this point in his life. There are some familiar components here though – the katana, the Kruger/Kane-like villain, the Highlander’s proclivity for reminiscing.

The only drawback to the book is the sketchy quality of the artwork. The cover design is awesome and whets the appetite for a similarly polished look throughout, but the comic just doesn’t quite deliver on that front. The character designs are a bit clunky and the lack of any discernible eyes in a lot of the panels takes away from the artists’ ability to display a wider range of emotion. There are a few issues with body proportion as well as hurried look of some of the background imagery. I’m not too concerned about it though; this is, after all, a new comic company and they’re bound to get better as the issues pile up.

Regardless of whether you’re a Duncan or Connor fan, if you’re like me, you’ll enjoy this take on the franchise.

Adam Cadmon is the pen name for a man who has been writing for a few years. He’s done his share of straight-laced writing, college press, blogging, some other not very glamorous technical writing to keep the bills paid. Itadakimasu.

By Johnny "The Machine" Hughes 3 hours ago

Review: Nancy Drew and the Hardy Boys; The Death of Nancy Drew #5 (of 6)

By Lucas Fashina 2 days ago