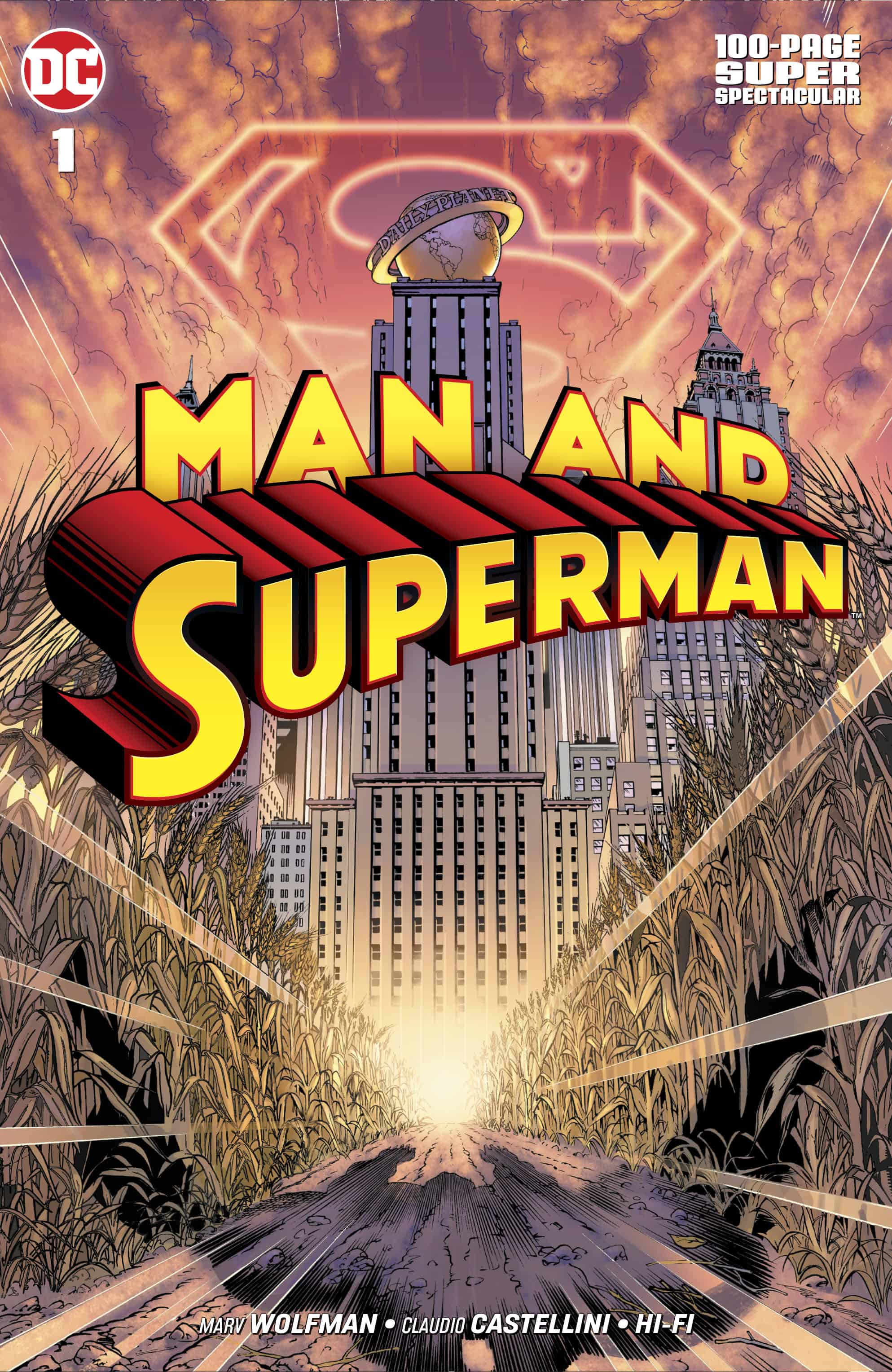 These are the kinds of Clark Kent stories I love.  Yes, this is a story about the man Clark Kent who also happens to be Kal El, the last son of Krypton who is more widely known as Superman.  In recent years, movies, animation and the comics have tried to give us more depth and emotional complexity to the Man of Steel.  I applaud the move.  However, in doing so they have often lost that indefinable quality which Superman has always possessed; namely that he IS Clark Kent, Kansas farm-boy.  Everything else is ancillary to that one immutable truth and the best portrayals, in my opinion, of Superman have always had that.

Marv Wolfman (Tomb of Dracula, Crisis on Infinite Earths) and Claudio Castellini (Silver Surfer, Red Sonja) have created a heartwarming first issue in this title which examines Clark Kent’s transition from Smallville farm-boy to Metropolis reporter.  This is an endearing tale that is split into four parts that follow this mental and emotional journey.

Part 1, titled ‘In Which He Leaves Smallville As A Boy’,  illustrates Clark’s shell shock as he realizes how different the big city is to the small Kansas town he grew up in.  The Metropolis Kent arrives in is not the Metropolis we are used to seeing once Superman has established himself.  This Metropolis is much more akin to Gotham City, albeit with a little less darkness, graft and corruption.  Nothing is as Clark expected and the idyllic dreams of Clark Kent the boy are dashed as he realizes the truth of Metropolis.  His idealism is also challenged by the public’s reaction to his first attempts to use his powers to help the people of the city.  Shunning the Superman uniform sewed by his mother as being ridiculous, Clark moves about the city in an improvised costume ironically similar to the one first used by Batman in ‘Batman Year One’.   This costume and his interference in Metropolis are not well received.

Part Two is titled ‘He Must Choose Between His Fears’.  In this section of the story Clark is pining for the life he knew back in Smallville.  He misses the life he knew.  However, he has also found friends he can identify with in his fellow janitors.  The simple kindness they grant him shows him that though life is different in Metropolis there are good people in his adopted city.  Additionally, talking to his fellow workers he hears their problems and Clark, good man that he is, is resolved to help them in any way he can.  Although he has the ability to help them with his powers he is resolved to help them as a reporter as well.  With that in mind he redoubles his effort to land a job in his chosen profession with his sights set on working for The Daily Planet.

Part Three, ‘In Which He Asks The Question That Will Change His Life’, is the turning point of the story.  Whether they know it or not, Superman and Lex Luthor have already taken the first steps in the storied conflict between those two men.  Lois Lane has begun to realize the true nature of the man who will eventually be called Superman and has resolved to use her considerable influence to tell his true story.  Her words in The Daily Planet inspire Clark and renew his desire to be a hero when he is not a mild-mannered reporter.

Part Four, ‘In Which He Becomes A Man’, is aptly named.  Clark embraces his dual nature and takes responsibility for this city he now calls home.  He confronts Luthor and defeats his scheme, the first of many times he will accomplish this feat.  He also wins an ally in Lois Lane.  She uses her influence to help him gain a job while establishing the friendly rivalry relationship that will eventually blossom into romance.  Finally, Clark emerges as Superman after interviewing himself so that he can communicate with the people of Metropolis.  In his message to his fellow citizens he explains himself and resolves to aid the city while leading by example.

Marv Wolfman has created something truly special here.  As I stated in the beginning, these are the types of Superman stories I love.  This is who the Man of Steel is.  He is a Kansas farm-boy who happened to be born light years away.  He is a good MAN who has the powers of a god.  Wolfman gives us all of this and wraps a heartwarming story of transition, growth, emerging super-villains and emerging super-heroes around it.  Meanwhile, the impeccable artwork of Claudio Castellini brings this tale to life.  The artwork is classic and timeless.  It is a book that radiates hope and goodness with its rendering of Clark Kent and Superman.  In all, this is a superb piece of storytelling and a book that I highly recommend