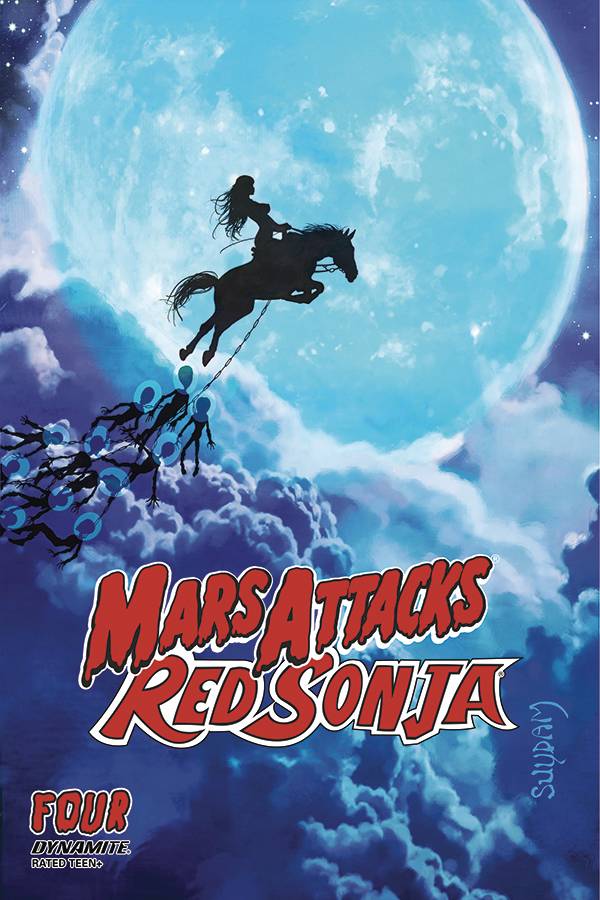 In the Mars Attacks Red Sonja #4 you have the blending of two cinematic styles that defined the trends of each of their own generations. In Mars Attacks you have the 60s cinema defined by UFO themed movies that dominated Science Fiction. In Red Sonja, you get your heroic adventurer from a supernatural lands of fables. If you are a fan of the campiness of both you’ll love this title and where it’s going. For what it’s worth I’ll give John Layman credit for his attempt at such an ambitious endeavor.

In the previous issues of Mars Attacks Red Sonja, Sonja had been captured and been subjected to experiments by Xi’zeer, the king of Bryssyndyn and Chief Martian scientist. She eventually escaped and was able to meet up once again with her allies.
In the current issue of Mars Attacks Red Sonja #4, Red Sonja and her allies go into battle against the Martian army. The battle seems winnable for Red Sonja until she meets her Martian Counterpart Green Sonja (1st Appearance of Green Sonja). Made with Hyrkanian Warrior Borne DNA, and fused it with the Martian DNA, Green Sonja is a match for Red Sonja if not better. It turns out that this was a bulk of Xi’zeer’s strategy in order to make a half-human half alien warrior.

To tell you the truth there were plenty of Jaw dropping moments in this issue that overshadowed some extrinsic details surrounding some of Red Sonja’s side characters; and for that reason made me question why it was even in there none of it seems important or made much of an impact so far.

Let me be clear, I wasn’t expecting H.G. Wells’s material here, but Mars Attack Red Sonja #4 is missing some of the elements that makes the Mars attacks and Red Sonja properties great individually. Lost is the campy Sci-fi. Lost is the over the top violent nature. Heck, wildly inappropriate battle attire of Red Sonja is missing in Action.

As for the art by Frank Strukan, I feel that there were maybe 3 astounding panels, and the rest most definitely would have been better had it been in just black and white.

By Johnny "The Machine" Hughes 3 hours ago

By Johnny "The Machine" Hughes 9 hours ago

PREVIEW: The Philosophy of Spider-Man

ABLAZE bringing “Diary of Nerd” to nerds everywhere this February