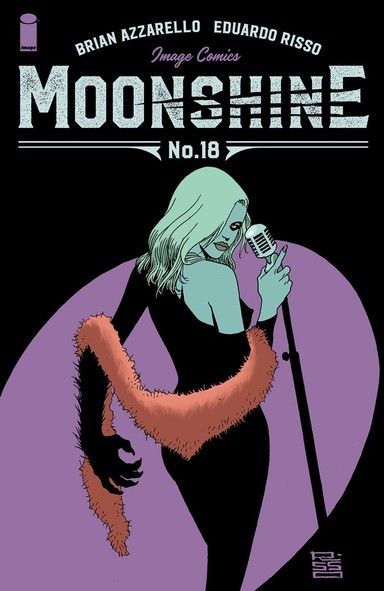 Moonshine, is a battle of gangsters fighting werewolves.  It may sound ridiculous, but the premise is not worse than “Little Women and Werewolves”, or “Pride and Prejudice and Zombies”.  Brian Azzarello, has effectively turned a ludicrous  idea into going on 4 volumes of material, that should not be ignored.

In the last volume, Moonshine, Vol. 3: Rue Le Jour,  Delia and an Handsome Lou were on a quest to rid Lou of his werewolf curse, only to cross path with Jean de Baptiste.  In the Appalachian Mountains, the Holt family’s conflict with the NYC boss comes home to roost.

In the current issue, Moonshine, Vol. 4: Angels Share, we catch up with Tempest Holt in NYC plotting her revenge .  Handsome Lou ain’t so handsome anymore.  He has been slumming it in the worst parts of New Orleans.  Eliot Ness gets added to the story.

I gotta warn you, that Moonshine #18, is not exactly a stand alone issue.  It makes more sense if you go back and and read the first 17 issues again before rolling into this one. Nothing has changed in the art by Eduardo Risso, this was a fast forward issue so no need for anything fancy. Overall this issue did what it was supposed to do. Catch the reader up, and tease the direction that Azzarello is going to go.

By Johnny "The Machine" Hughes 14 hours ago