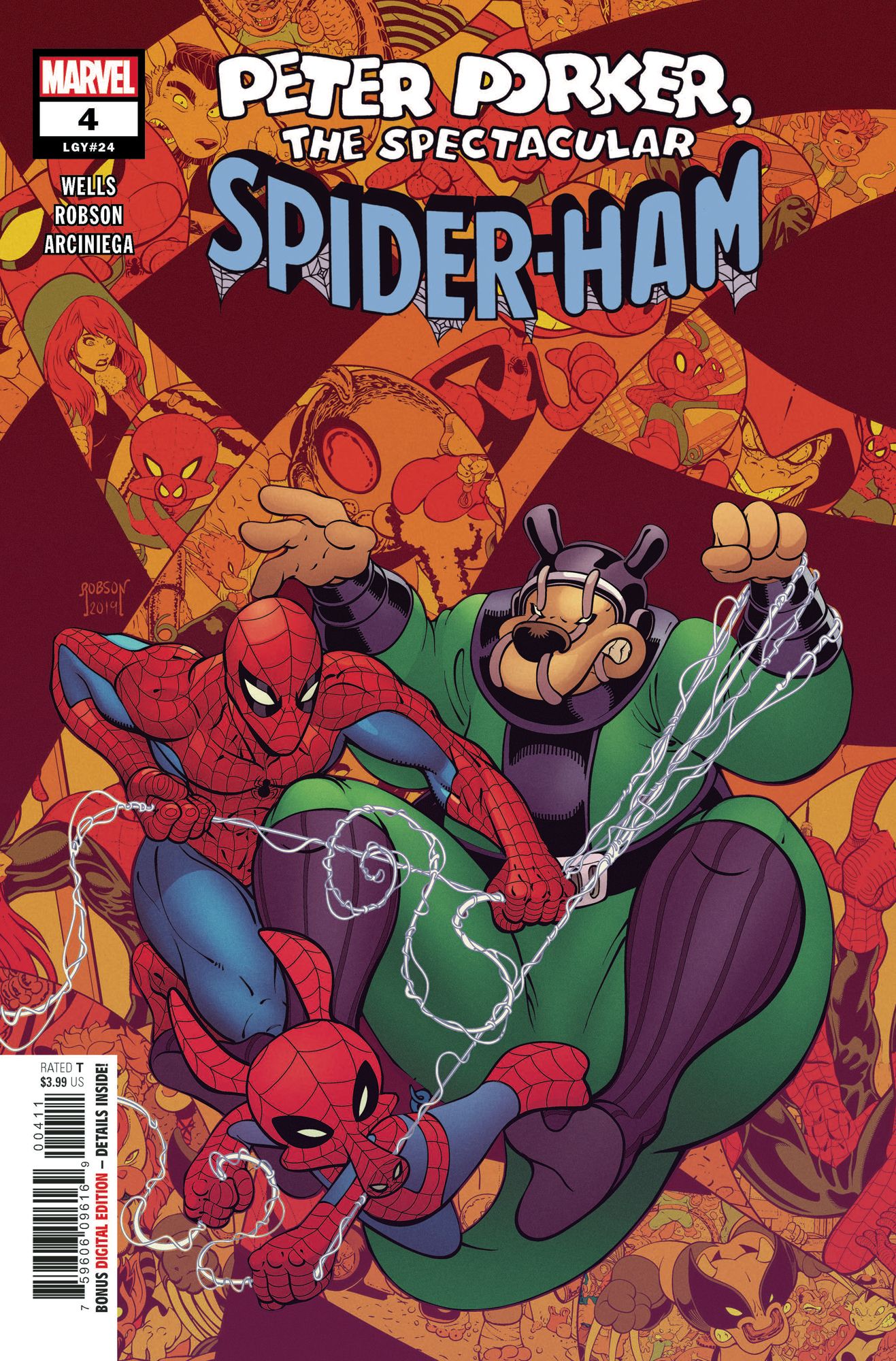 Spider-Ham should always be about humor and hijinks and Zeb Wells is the master of both. The reader’s enjoyment of this issue depends entirely on their love for Kang-tastic puns and Pork-tacular dad jokes. The Kang collective has turned it’s attention to Kang-aroo. The Eighty-Ninth Gathering of the Kangs is reminiscent of the Council of Reeds and Parliament of Doom from Hickman’s Fantastic Four run, but with way more banter. The Kang Collective Exile Kangaroo and decide to destroy his home world for his insolence.

That home is Larval Earth and Kangaroo meets with Spider-Ham and Spider-Man to show them the destruction soon to come. In the past, Kang attacks Larval Earth and the Sca-Vengers stand together against him. The entire battle was clearly written after Zeb Wells watched Avengers Endgame for the Eighty-Ninth time. The characters are amazingly cheesy and the dialogue is loopy fun.

The extended Endgame homages finally result in the arrival of Spider-Ham, Spider-Man and Kangaroo (‘The Kang Club!’) in full Kang getups to the past of Larval Earth where they too quickly take down Kang. Just as we think this is all two easy a classic twist ending (“You’re gonna ruin the big twist!”) resets everything. The cliff-hanger is perfectly executed and leaves us wanting to see where the madness goes next issue.

The art by Will Robson is a great melding of epic comic adventure and cartoon silliness. It doesn’t reach the ridiculous levels the writing allows for, but his costumes, animal Avengers and gathering of Kangs are all light fun. The art allows him to showcase a broad range of Kangs and an animal superhero team of punny nonsense. His focus remains more on telling the story than going crazy with the potential character designs, but this focus does make for a clear read suited to a book that younger readers will love.

The colors by Erick Arciniega stand out as the biggest star of this book. He perfectly captures the tone of the Kangs, the Sca-Vengers, The Kang Club and the twist ending. His work nicely shifts the book to one final homage to the Avengers films at the end of the issue.

Zeb Wells is an amazing writer and his work here suits Spider-Ham well. The reader’s actual enjoyment of the issue depends entirely on if you have the time, resources and desire to read a relatively throw-away comic in which the stakes are massive but the threats never turn out to be as powerful as the punchlines. The extended Avengers Endgame tribute feels like a YouTube video rather than a comic story. But for those who read comics for silly humor and insane dialogue, this is top form nonsense that Stan Lee would be proud of.

A NEW PHOENIX TAKES FLIGHT IN THE AVENGERS ‘ENTER THE PHOENIX’ TRAILER!