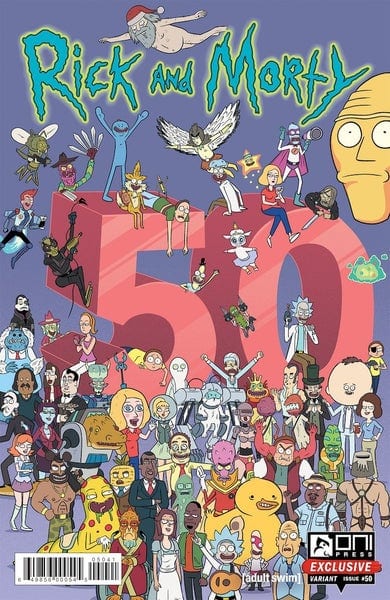 I have been a hopeless Rick and Morty devotee since the first time the irreverent animated series showed up on Adult Swim. I couldn’t get enough of the edgy, sarcastic satire with its unapologetic similarities to Back to the Future, the 80’s film that obviously inspired the brilliant co-creators, Justin Roiland and Dan Harmon. Beyond the inspiration of the two main characters, Rick and Morty has little else in common with the Robert Zemeckis film. In fact Rick and Morty has little in common with anything else in the pop culture zeitgeist; the narratives are firmly rooted in science fiction drawing inspiration from such eclectic sources that it appears random. Very early on Rick and Morty began to fuel its own licensed property propaganda bonazai and soon the shelves of the local shops quickly filled with everything from figures and t-shirts to games and collectible art all featuring the likenesses of our favorite Rick and Morty characters. It’s only logical that a comic book based on the show would not be far behind. Here we are 50 issues into that run and the comic book based on one of the funniest, most imaginative and original shows ever is on par beat for eccentric beat with the show that spawned it.

The comic book has reached the bar sent by the television series issue after issue; not just on a comedic level but, as a creative tour de force featuring a seemingly endless cast of imaginative supporting characters, a bottomless well of material which to pay sardonic homages and a talented queue of writers and artists just waiting for another chance to push the envelope. The comic book has come to be a source of  quality Rick and Morty material to satiate an audience clamoring for more of the genius we have come to expect from the creators associated with this tsunami of sci-fi satire. This issue 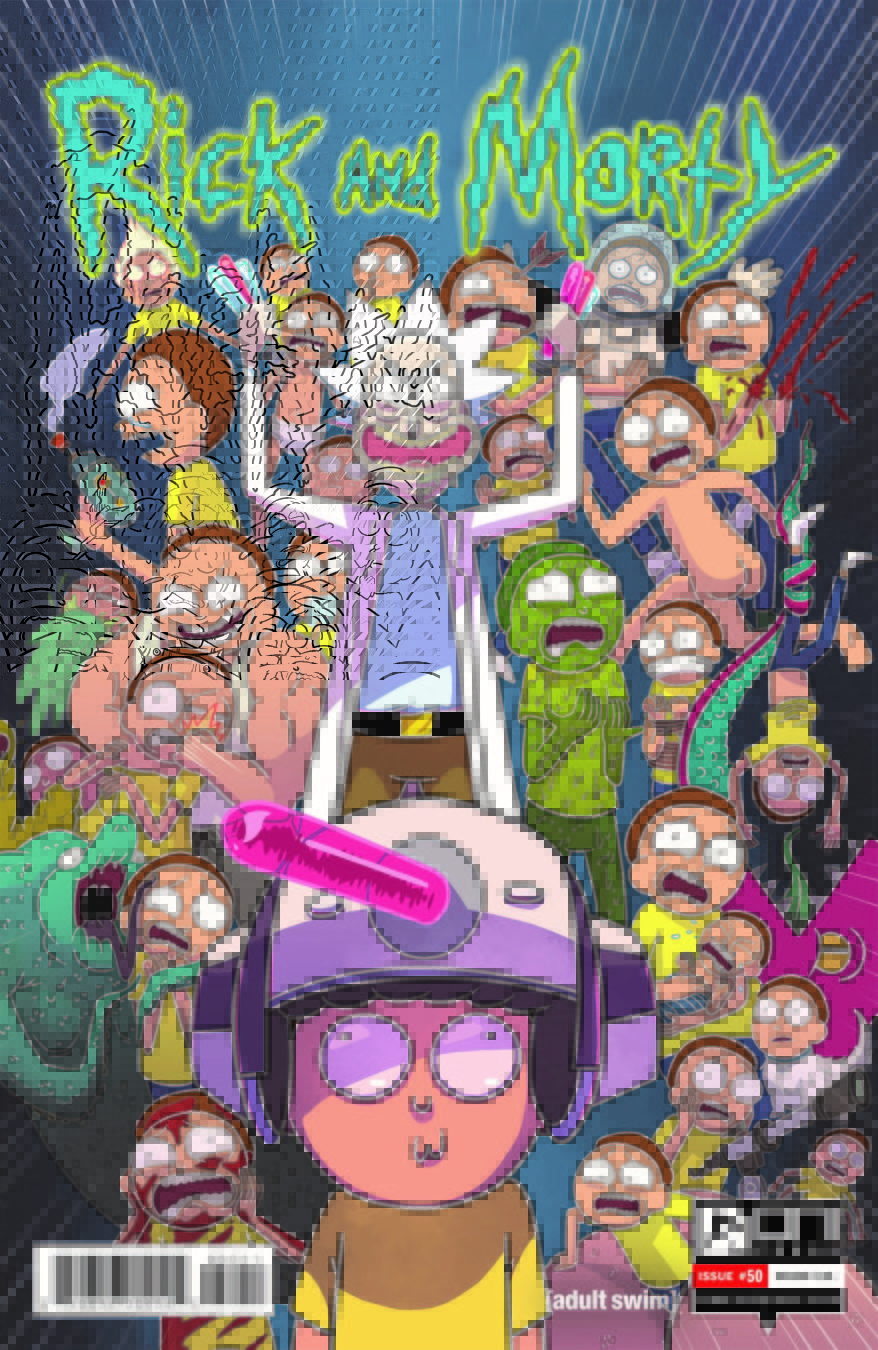 celebrates the 50 issue milestone by treating us to another installment of Morty’s Mindblowers, an anthology style format that provides the basis for a barrage of Morty’s erased or more accurately, removed bad memories. Stored in memory tubes, these often awful events are replayed by plugging the tubes into a helmet strapped to Morty’s head. The premise, like “Inter-dimensional Cable” spun out of an actual episode of the series and introduced us to many of the fan favorite characters and properties like Ball Fondlers, Two-Brothers and Ants In My Eyes Johnson. Many of these off-the-wall players have gone on to be featured in their own one shots or mini series from Oni Press.

The anthology format works extremely well for this type of issue. It allows for an amazing cast of talented creators to work on a single running narrative that is actually several vignettes held together by the over arching plot device of the memory tubes. This creates the perfect circumstances for each story to have its own look and tone within the narrative. the subject of each “memory tube” differs greatly from one to another beginning with Morty accidentally creating an utopian society based on peace, love and harmony, then just as accidentally wiping it out by spilling his over-sized carbonated drink creating cola catastrophe that ended the table top Eden. From there the thematic fare ranges from friendship, to public humiliation to war. Just as varied as the subject of each tale is the tone which runs the gamut from light-hearted comedy to the pain of  sudden loss as in the tragic end of the butter passing robot. One of the most remarkable elements of Rick and 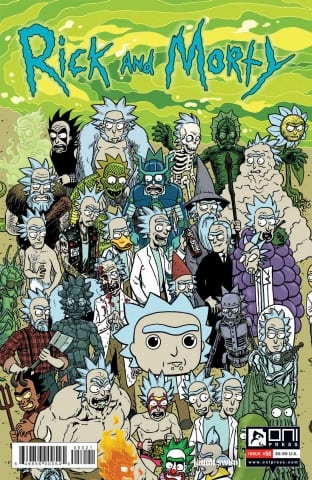 Morty, the comic book as well as the show, is the diversity of subject matter, never known to shy away from controversial material, the writers of Rick and Morty have tackled myriad themes and hot button issues such as sexual identity, politics and family relationships. This issue features a stellar team of creators familiar to anyone who has been reading this series, writers Kyle Starks, Tini Howard, Sarah Graley, Marc Ellerby, Benjamin Dewey and Josh Trujillo. Visually the Rick and Morty Universe has its own distinct look and visual vocabulary, however within that realm there is room for unique interpretation as is evidenced by artists Marc Ellerby, Andrew Maclean, Jarrett Williams, Sarah Graley, Kyle Starks and Rii Abrego. These illustrators bring their own style to the world we have come to recognize as the environments and population of  the Rick and Morty-verse. The colors are such a huge part of this world whether its the yellow of Morty’s shirt or the putrid pink of Scary Terry’s disfigured face this is a vibrant world, meticulously colored in this issue by Sarah Stern, Nick Filardi and Benjamin Dewey in a fitting 50th issue milestone.

Overall this book is an entertaining foray into the world of Rick and Morty via some of Morty’s less than stellar moments. The heart and mind of the television show is captured here is word and picture. The sardonic wit, the razor sharp dialogue and the often dark humor are all represented in impressive fashion. If you are a die hard fan of the show and have not made the transition to the comic book, here’s your chance. This issue is a perfect stand alone issue as well as a tailor made jumping on spot. 4/5