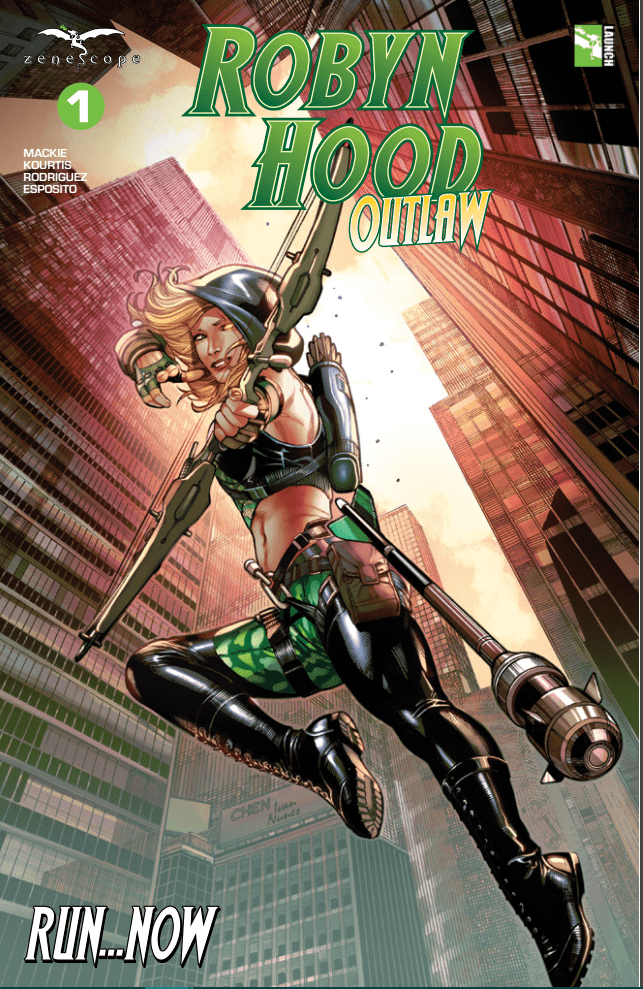 Robyn Hood Outlaw #1 is part one of a planned six issue mini-series.  This series by Howard Mackie (XMen: Gambit & Rogue, Spirits of Vengeance:  Rise of the Midnight Sons) and Babisu Kourtis (Grimm Tales of Terror, Dark Mists:  Kurotobi Skies) is set in Xenescape’s Grimm Universe and follows the events that unfold when Robyn Locksley returns to New York.

This first issue does not present a lot in the way of plot development.  However, what it lacks in plot advancement it more than makes up for in memorable action scenes and a sense of grim menace.  The book opens with Robyn Locksley returning to her New York apartment.  As she walks up the stairs, she finds that the door to her home has been shattered.  The interior is in similar shape and Robyn is in a foul mood when she hears a noise coming from her bathroom.  Taking up her bow she rushes into the bathroom.  However, instead of finding an enemy, she finds her friend, the police commissioner.  The commissioner has been badly wounded by a stranger’s arrow topped with a peacock feather.  We will continue to see those arrows shot at Robyn throughout the issue.  Additionally, the commissioner has been poisoned and as Robyn pleads with her friend to wake up, two police officers conveniently show up before being called.  Robyn realizes that she has been set up and the first of many great action scenes unfolds as she puts a beat down on these dirty cops.  The rest of the issue is a harried flight from the apartment as she seeks to lose the police and the mysterious archer.  The issue ends on a cliff hanger as Robyn has finally eluded her pursuers but must now try to determine what the hell is going on. 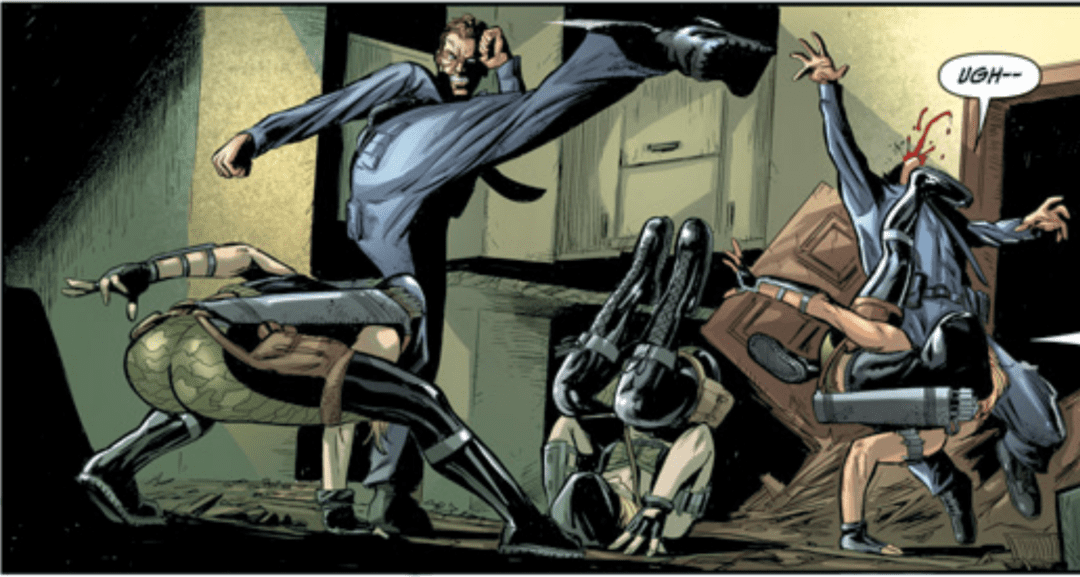 This is a very enjoyable book and one that is well worth reading.  I’m not sure what is going to happen going forward with this series, perhaps the unfolding plot will be the greatest thing ever written.  However, what I can say is that this book is incredibly fun to read and visually pleasing.  It’s hard to ask much more than that.  Robyn has obvious parallels in Green Arrow.  However, her character design and personality are different enough that she easily stands alone as her own character and she is an engaging heroine that is fun to read.  Babisu Kourtis brings some incredible action sequences, some of the best I’ve seen to be honest, and her attention to detail is second to none.  Robyn’s fighting style feels real as she used blows to the knee to incapacitate and precise strikes to nerve clusters to disarm.  All of this is drawn accurately and most impressively, I can only think of one panel that looked somewhat awkward.  Not an easy feat to pull off with so much complicated anatomy to draw in the fight sequence.