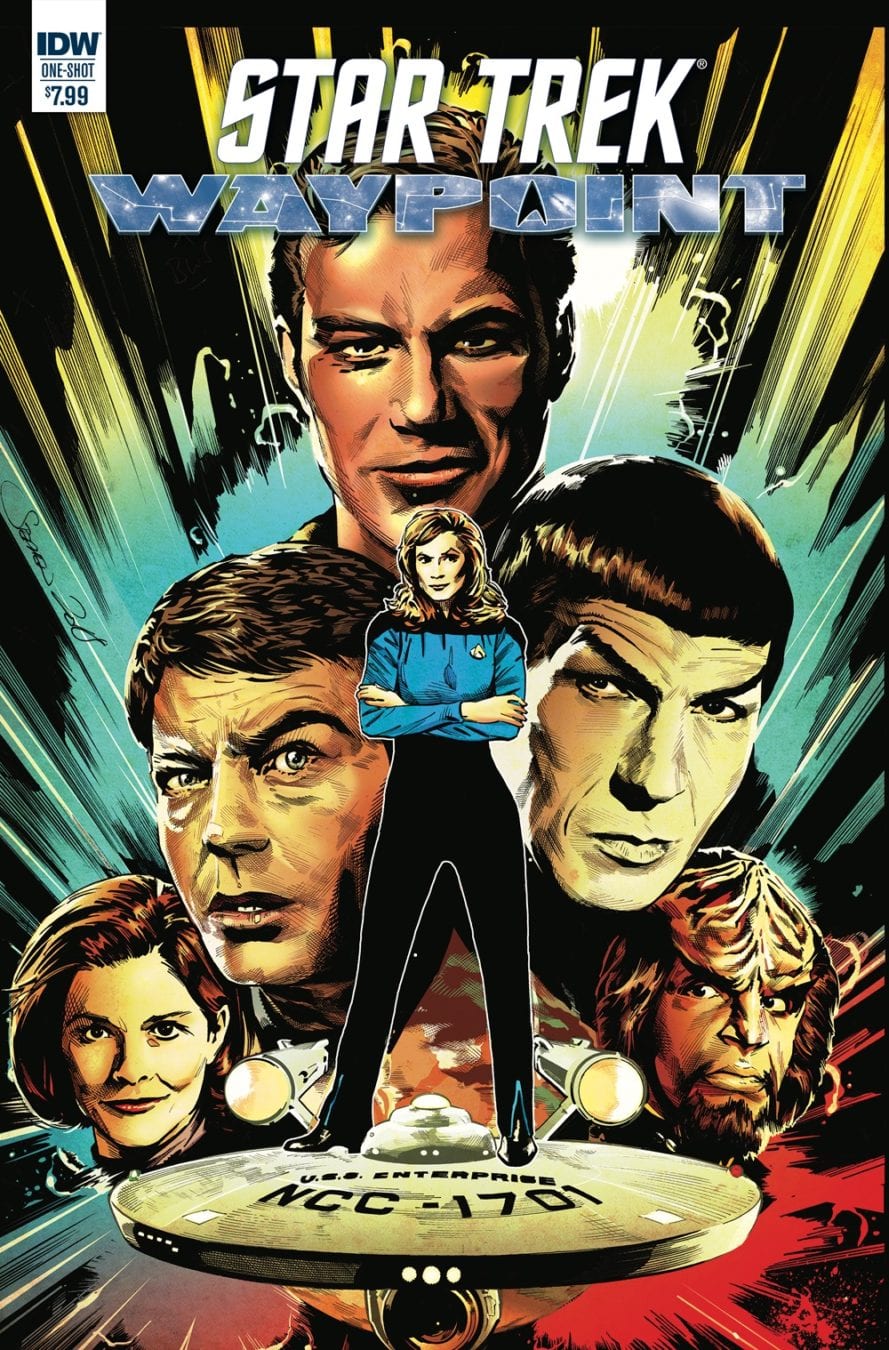 I know that there is currently a lot of debate going in the Twitter-verse about giving credit where credit is due; something I take seriously by the way.  Imagine then my disappointment that this particular Star Trek book lists only the cover artist.  Don’t get me wrong, it is a great cover, but c’mon!

Waypoint is an anthology book, with a number of Trek crews getting a bit of a run out. As you would expect, the originals are up first:

There seems to be something wrong with Bones.  He has a heart problem; that is he has a crush on a fellow doctor.  However, things get “fascinating” when it becomes apparent that the doctor in question is Vulcan.  What ensures is an almost comedy of errors of the heart.  The story, for being simple, is a well observed slice of life painted as Trek; after all who hasn’t pined after the person that they couldn’t or shouldn’t be with?  Throw in some very good art, which matches the screen personas and likeness well and you have a really good start to the book.  It is a shame then IDW, that I cannot give credit where credit is due!

Next up, appropriately, is the Next Generation crew, circa season one prior to the untimely death of Tasha Yar.  This story sees Tasha and Doctor Beverly Crusher board an alien ship with an experimental warp core.  Thing is, there is a person or persons missing.  Things go from confused to worse when Crusher also disappears!  The story reads OK, matching the early season confrontational aspects between Crusher and Picard.  The problem is the art; it is a cartoony style that lacks grace in a lot of places.  Still you can make out who is supposed to be who, mainly due to the fact that there is only three regular cast members to worry about.  It is a shame then IDW, that I cannot give critique where critique is due!

The Swift Spoke features a couple of would be Voyager colleagues with Commander Janeway and Lieutenant Tuvok on a first contact mission.  This being Janeway, there is plenty of Trekno-bable to contend with in a story that despite hints at looking to prove herself to Tuvok actually feels like a bit of a damp squid.  The art tries hard with it’s younger than we know Janeway, though Tuvok’s face was well photo referenced.  The figure work is appalling, especially the panel where the away party are running for their shuttle, which could be drawn by just about anyone who could hold a pencil.

Finally, The First Year sees Ezri Dax catching up with Worf a year after Jadzia ‘s death.  The pair catch up on Qo’Nos, so expect bat’leth and conversation.  To be fair, this is probably the second best story in the book, though I am sure that Ezri and Worf had made their amends on the show, which makes this story a tad redundant.

Space, the final frontier.  These are the voyages of….. well a group of Sci-Fi shows linked on the premise of a grand Federation.  Each iteration has its charm and it’s problems.  For the most part, IDW have done a decent job in regaling the tales of Enterprises, a Voyager and a station situated near a wormhole. I am sure that fans of the respective shows will enjoy this book, but for me, a tad more quality is required for the most part.  Saying that, the first story is head and shoulder above the rest, though I am not sure it’s worth the $7.99 all by itself

By Nemesis 8 hours ago