Teen Titans Annual #1 features two separate stories to peruse and enjoy.  The first story, “Robin vs Robin, by Adam Glass (Teen Titans, Suicide Squad) builds upon previous events in Teen Titans #23 and #24.  Having been thwarted by “The Other” as they sought to rescue Commissioner Gordon, the Teen Titans were left for dead in a building that was demolished around them.  Now, the current Robin (Damian Wayne) is convinced that his team has been betrayed by someone intimately familiar with the operation.  Further complicating matters is the fact that Damian has begun to identify with the new members of his team:  Crush, Kid Flash, Red Arrow, Roundhouse and Jinn.  The last of those teammates, Jinn, may also hold romantic possibilities for Batman’s son in the future of the series.  Having surmised that Red Hood (Jason Todd) must have betrayed him and his team, Damian seeks out Todd in a Texas bar and confronts him.  Todd is incredulous at first but when Wayne produces his secret weapon, a mysterious object which obviously holds great personal value to Todd, Red Hood loses his temper and shows Robin exactly how much he has left to learn.

The second story, “Joy To The World”, is also written by Adam Glass who is the currently writing the Teen Titans series as well.  This story begins with four of the teams members, Kid Flash, Roundhouse, Crush and Jinn, training with each other in a bid to improve their abilities and teamwork.  Red Arrow, Emiko Queen, emerges and watches them practice before being noticed herself.  The team is unsure of what her reaction will be as they are eager to gain her approval, approval she grudgingly bestows.  At that moment the team is alerted to possible trouble in a local mall and they respond.  There they are confronted by a villain calling himself Joystick, a name which brings a snigger to various members of the Teen Titans.  Joystick has the unique ability to possess and control people through touch and he dispatches Kid Flash while possessing Jinn.  While he is in possession of Jinn he lets slip that she has serious romantic feelings for Robin.  Additionally, although he does not disclose it, Joystick learns that Jinn has some awful secret that she is desperate to keep from her new teammates. 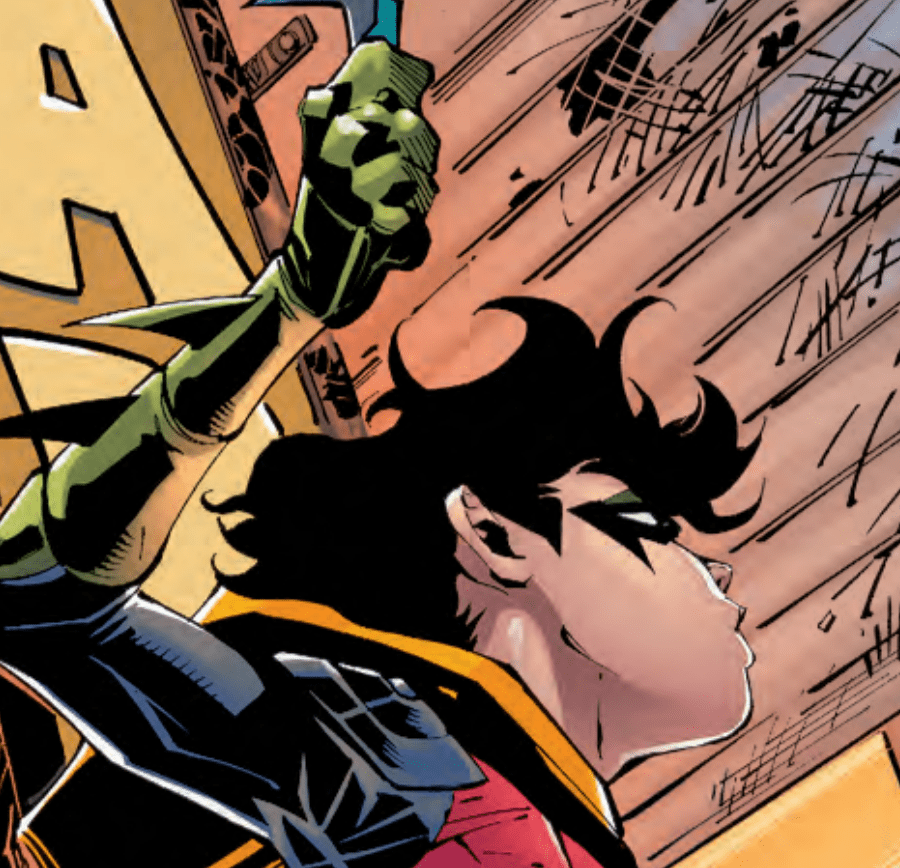 Joystick is eventually defeated and a later panel shows him shackled and imprisoned on Riker’s Island.  It is here that the story takes a more ominous tone.  Jinn appears in Joystick’s cell and threatens him both physically and verbally in an effort to protect her secret.  As the issue concludes, Robin returns to the Titan’s headquarters beaten badly and half alive.  Jinn picks him up and promises to tend to his wounds as she carries him inside the building.  Meanwhile, Crush has observed all this and destroys a pillar in the parking garage in obvious anger setting up an interesting love triangle going forward.

This annual sets up some new themes for the upcoming issues and is entertaining to boot.  All too often, annuals feature one-off stories that are interesting but ultimately useless to the larger story arc.  In this case, Glass has given us two stories that both tie back to what is going on while introducing new elements to look forward to.  The artwork in both stories is adequate if not mind-blowing and does a very good job conveying the story and action therein.  In truth, while I preferred the pencils by Ryan Benjamin in “Robin vs Robin”, I preferred the inking by Jordi Tarragono in “Joy To The World”.  Richard Friend’s inking seemed over saturated and messy at times while the pencils by Jose Luis were not quite up to the standards set by Ryan Benjamin in the first story.  Overall this was a very enjoyable book and very deserving of a better than average grade.