This fourth installment of “The Batman Who Laughs” by Scott Snyder (American Vampire, Iron Man Noir) and Jock (2000 AD, The Losers) continues to follow the aftermath of Dark Nights:  Metal. Parts 1-3 established that the Batman Who Laughs had survived his encounter with Joker and had crossed over from the Dark Multi-Verse in order to set some nefarious plan in motion.  Operating out of this plane of existence, BWL (Batman Who Laughs) is intent on scouring the multi-verse for various instances of Batman and his allies for purpose or purposes unknown.  Each of these instances of Batman/Bruce Wayne present an alternative life path for the titular hero and in many ways they are also a mirror into different personality aspects of the hero that BWL is plotting against.  Outmaneuvered and forced to confront hard truths about himself, this beleaguered version of Batman continues to reevaluate his options while searching for any clue or weapon which can be used to achieve victory.

This brings us then to “The Batman Who Laughs #4”.  I have to be up front that I’m not a big fan of Dark Nights:  Metal or The Batman Who Laughs.  It’s nothing personal, the stories just don’t appeal to me for whatever reason and so I’ve tended to avoid them or read them with a detached view.  That said, I believe that Snyder’s writing on this series is clever and provides some very interesting insight on a number of different levels.  In this issue, Batman has constructed a visor similar to BWL’s and is attempting to see the world around him the way that BWL sees it.  This is a common idea in martial arts, that you must learn to think like your enemy so that you can understand them and then defeat them.  This is also something I could see Batman doing were he to become desperate, or if he were to disregard the advice of those who tend to look out for his welfare better than he does.  In point of fact, Batman does just that 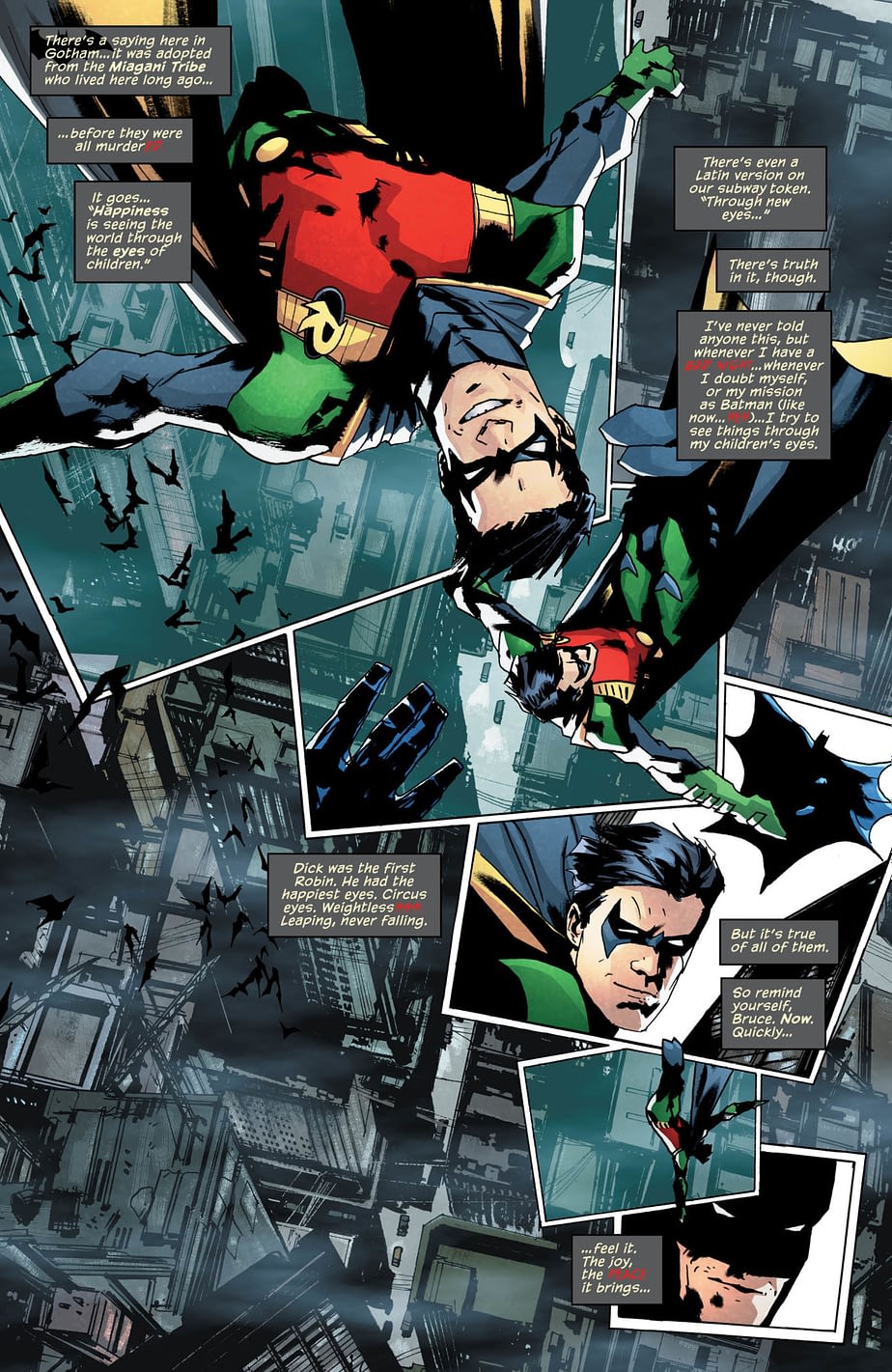 early in the book, when he has a conflict with Alfred that provides foreshadowing of what is to come in the books conclusion.  Honestly, one of Batman’s most glaring weakness’ is also considered to be one of his greatest strengths, drive and will.  Batman exhibits a superhuman will and drive to succeed which can serve him well.  However, where normal men would quit or rest, Batman will persevere.  This can put him in mortal danger, as evidenced by the road-map of scars that is his body, or in spiritual/emotional danger, as exhibited by his use of the visor in this issue.  This visor is a temptation, a source of corruption, and two people in particular provide this warning to the Caped Crusder.  A warning that is always present in tales like these.  In Greek myths of old, the hero would often get prophecy and one character would then warn the hero of possible consequences if they chose to proceed with their actions.  In this way, lessons about free will and the consequences therein were passed along even as concepts such as fate or destiny were prevalent.  In this story, that role is taken by James Gordon Jr.  He speaks to Batman about the dangers of looking at the world through different lenses and exposing yourself to corruption.  He also explains that journeys of self-discovery are not always positive, and what you find may be an internal defect that has always existed and not the corrupting influence of an external force.   Surprisingly, the second figure to provide a warning for Batman is The Joker himself.  Batman, sensing that his perception of reality and his sense of self are being threatened, entrusts Joker with the task of slaying him should he falter and become a second version of The Batman Who Laughs.  Perhaps that is what BWL wants?  It’s ironic that the Joker, in a scene reminiscent of The Killing Joke, admits that he doesn’t want Batman to change or to lose.  Rather he wants an endless battle with his friend/enemy.  An eternal struggle full of twisted jokes and grim heroics.  As the story ends, Batman is put in a situation that ultimately ends badly and, possibly, shows that Batman has crossed the BWL’s Rubicon and has gone too far. 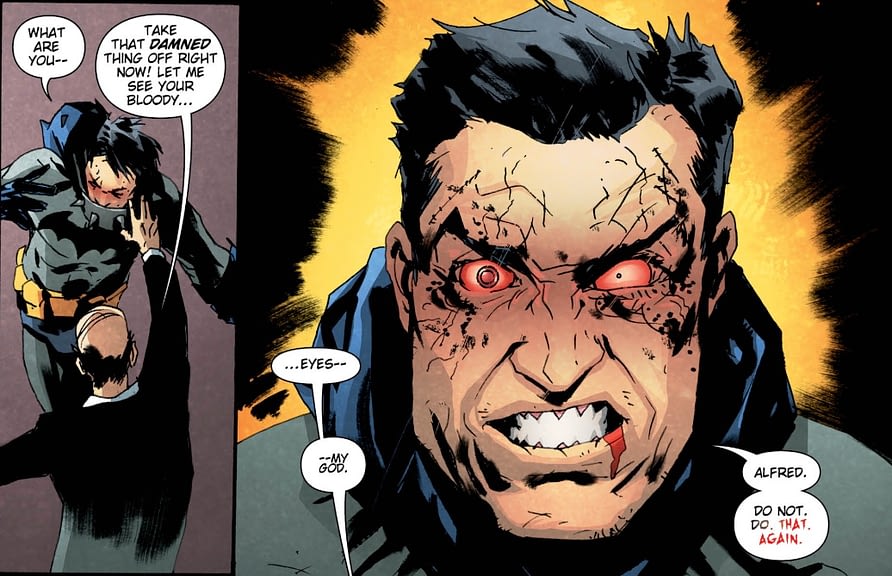 As I said previously, this is not my favorite story arc.  However, I have a profound appreciation for Snyder’s writing and character work.  In this issue, Snyder’s writing shines in three separate incidents:  the confrontation with Alfred, the conversation with James Gordon Jr., and the cathartic experience which was his Joker encounter.  Snyder exhibits a master’s command of dialogue and foreshadowing, using those three incidents to build tension for the book’s conclusion and events beyond.  If I had one critique, it would be in the writing of Batman himself.  That is probably why this arc doesn’t sit well with me.  I feel that Batman is slightly off.  I know that he is driven, but Batman appears to be driven to the point of compulsion.  His encounter with Alfred, while well written as noted, doesn’t seem in character.  Batman seem’s almost reckless, not an attribute I’d often associate with him.  Perhaps he really is just that desperate or there is some other influence acting on him.  Only time will tell.

Meanwhile, the artwork by Jock is solid and manages to convey some rather disturbing emotions in various panels throughout the book.  Jock’s use of angles and asymmetry are unsettling and give the book a horror tone.  The color is stark and uncompromising which further underscores the nature of the book.  It put me on edge from the very first page.  However, I found that the page layout could be a bit cluttered at times.  Rather than be a distraction though, that too added to the sense of menacing chaos.  If I had one real complaint with the art, it would be in the inking.  I do not believe that enough attention was paid to the ink on this book and it suffered as a result.  With better ink, I think the pencils could have been given the depth and shading that they deserved but sometimes failed to get.

All in all this is a very solid book with very good writing and artwork.  While it isn’t my cup of tea, I remain open to seeing where the story goes and I recommend it to anyone who is a fan of the series, Batman, or Dark Night’s Metal.

By Nemesis 2 days ago