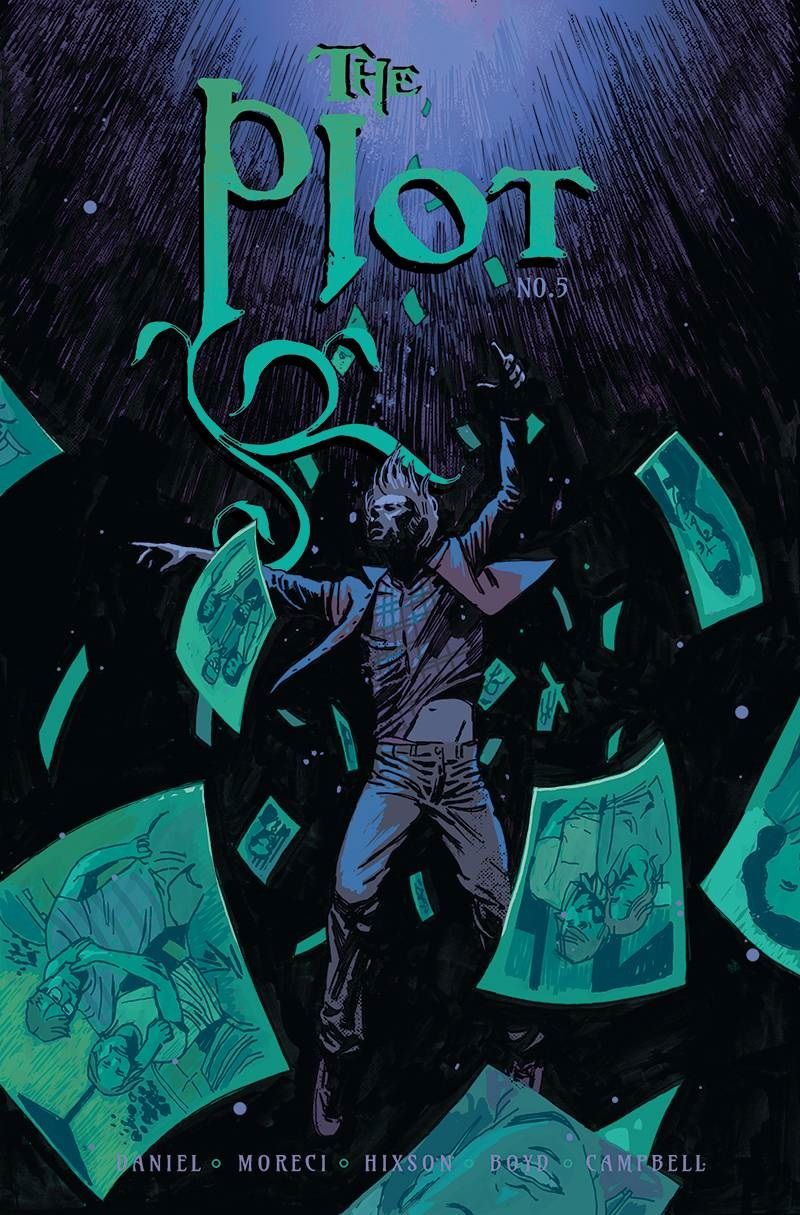 Families; we all have them.  Some even have deep dark secrets that were they to come to light, may have quite a negative impact on those around now.  However, in The Plot from Vault Comics, it may not necessarily be the secret that threatens this thrown together  family, but the actions and ramifications at the heart of those long ago days.

Chase, now with his newly  bequeathed niece and nephew, has decided to return to the family home.  Upon his return he wades into the dark depths of his family’s history,   What he finds, is the desperate need to believe coupled with s deity that bargains for it’s own wants, prior to delivering a level of succor to Chase’s ancestor.  Back then the deal of giving before receiving carried a huge burden, that now, having arisen Chase may have to face for the sake of is new family.

Written by Tim Daniel and Michael Moreci, this issue is a slow burner, especially if you are coming into this series for the first time.  By starting in the past from the get go; the book does feel a little of kilter.  But sticking with it pays dividends.  By showing us the past, Daniel and Moreci have shown the “why for’s”  which leave the impact on the modern version of the family for the next issues  The plot from the past isn’t terribly new, though it is done with a high level of grace that helps the various emotions resonate. With such great work being written for the past elements of the story, I do hope that the modern day setting doesn’t let the side down by relying on cliched horror tropes.

The art is provided by Joshua Hixson, who is an artist I am unfamiliar with.  Looking at this book, there is a sort of David Mazzacchelli feel to proceedings, though I think here it amplifies the frontier aspects of the story well.  Heavy inks are used to give the characters a more formidable, rugged look.  This does mean that there isn’t a huge range of emotion shown by the characters, but there is enough to help get the point across.  The colors are supplied by Kurt Michael Russell who get to play with different seasons as well as locales.  For the most part, the colors are great, detailed and helps set the scenes well.  It’s only with the introduction of the big bad that things get a little messy, but is that to be expected?  Finally letterer Jim Campbell gets to try different fonts for different aspects of the story; I am not sure that a difference is need, but it doesn’t detract from the reading experience.

Vault Comics has a tendency to aim for that spot just before horror, that follows some pretty dark deeds.  Sure there are tropes in play, but it is clearly not just horror for scares sake.  But in all honesty, this book is driven by the notion of the past being the past, but to speak of it gives it control.  I wonder how Chase will deal with that lack of control and what must he give to receive that which he desires?

THE X-MEN CONFRONT THE SWORDBEARERS OF ARAKKO IN THE NEW X OF SWORDS: STASIS TRAILER!

By Lucas Fashina 13 hours ago