So, before we get to the review let me ask you a question.  If you go through an entire issue of The Punisher and The Punisher never makes an appearance, is it still a Punisher book?  Look at that cover to the left, that is the only appearance of The Punisher in the entire book.  Frank Castle is most definitely in this issue but you aren’t going to see hide nor hair of the classic skull motif.  Keep that in mind as you read on.

In case you aren’t familiar with what is going on in The Punisher these days, Frank finds himself in Bagalia, a country run by Hydra.  Predictably, Frank Castle has been imprisoned and to his surprise, most of his fellow prisoners are people who in any sane country would be considered upstanding citizens.  A volunteer for a non-profit, an aide worker, a nun; these are Castle’s fellow inmates.  Imagine his surprise then when Castle is approached by a group of his fellow prisoners asking him to lead a prison break.  The unlikely leader of this lobbying group is a nun.  Frank is reluctant to help at first, rightly convinced that the prisoners who want to escape have no fighting ability and are most likely going to get killed.  However, the nun convinces him that his failure to help the prisoners will mean that the prisoners are just as likely to die in prison or in an escape attempt that does not include Castle.  Frank bows to this wisdom and agrees to help them, and himself, escape.  What follows can best be described as an extended episode of ‘The Dirty Dozen’, ‘The Great Escape’ and ‘Breaking Bad’.  Matthew Rosenberg (New Mutants:  Dead Souls, Secret Warriors) has surely written a great prison break/special operations story.  It is impressive what Castle is able to do with this motley collection of aid workers and everyday folk.  Meticulous, calculated and ruthless; Castle plans a heist-movie worthy plan that is pulled off to perfection.  (Put the feasibility of something like that going off without a hitch out of your mind, this is a comic book after all).  Rosenberg’s various schemes to achieve a variety of goals pass the real world smell test, don’t ask me how I know some of those plans would work, and they are cleverly written and utilized in the story. 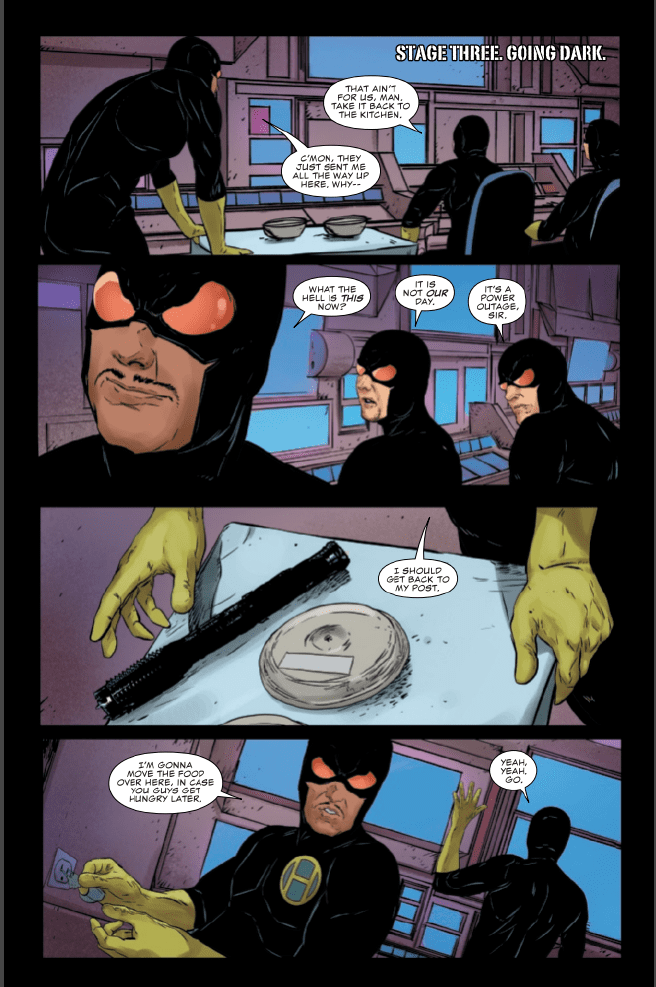 Predictably, Castle and company manage to secure the prison for themselves and one has to wonder if Hannibal Smith is somewhere off page smoking a cigar and loving it when a plan comes together.

So, that is pretty much the whole issue in a nutshell.  There are obviously more details and various panels of action and dialogue but I think that summary captures the spirit of the book.  Does that rub you as a Punisher book?  Me either.  However, the book is well written for what it is and so here is my dilemma.  Do I grade it based on the quality of the writing at hand or do I grade it based on what I want from a Punisher book?  I’m going to hedge my bets and give you a little bit of both.  That out of the way let’s get to the art.  Szymon Kudranski’s (Penguin:  Pain and Prejudice, Spawn:  Hell On Earth) art is fine for what it is.  It is professionally drawn.  The color is somewhat bland but perfectly acceptable.  But, on the whole, the artwork in the book is absolutely boring.  Even in those panels where there is action taking place, none of which involves Frank Castle or The Punisher I should add, the action is bland and vanilla at best.  Every time I review a book, I go through and choose panels I want use as clips in the review.  I try to choose images that reflect what is happening in the book and give you some sense for the flavor of the art inside.  I can tell you honestly, that for the very first time in my career as a reviewer of comic books, I had a hard time picking anything worth including in my review.  Nothing stood out.  So, once again I have a dilemma.  What is drawn is drawn professionally, from a purely artistic point of view.  However, the art does a rather poor job telling a visual story and conveying that sense of dynamism and narrative that you want in any comic book.  With all that said it’s my rather serious duty to not recommend this book.  Some of the writing is interesting but the art and lack of any real Punisher action make this issue dead on arrival for me.