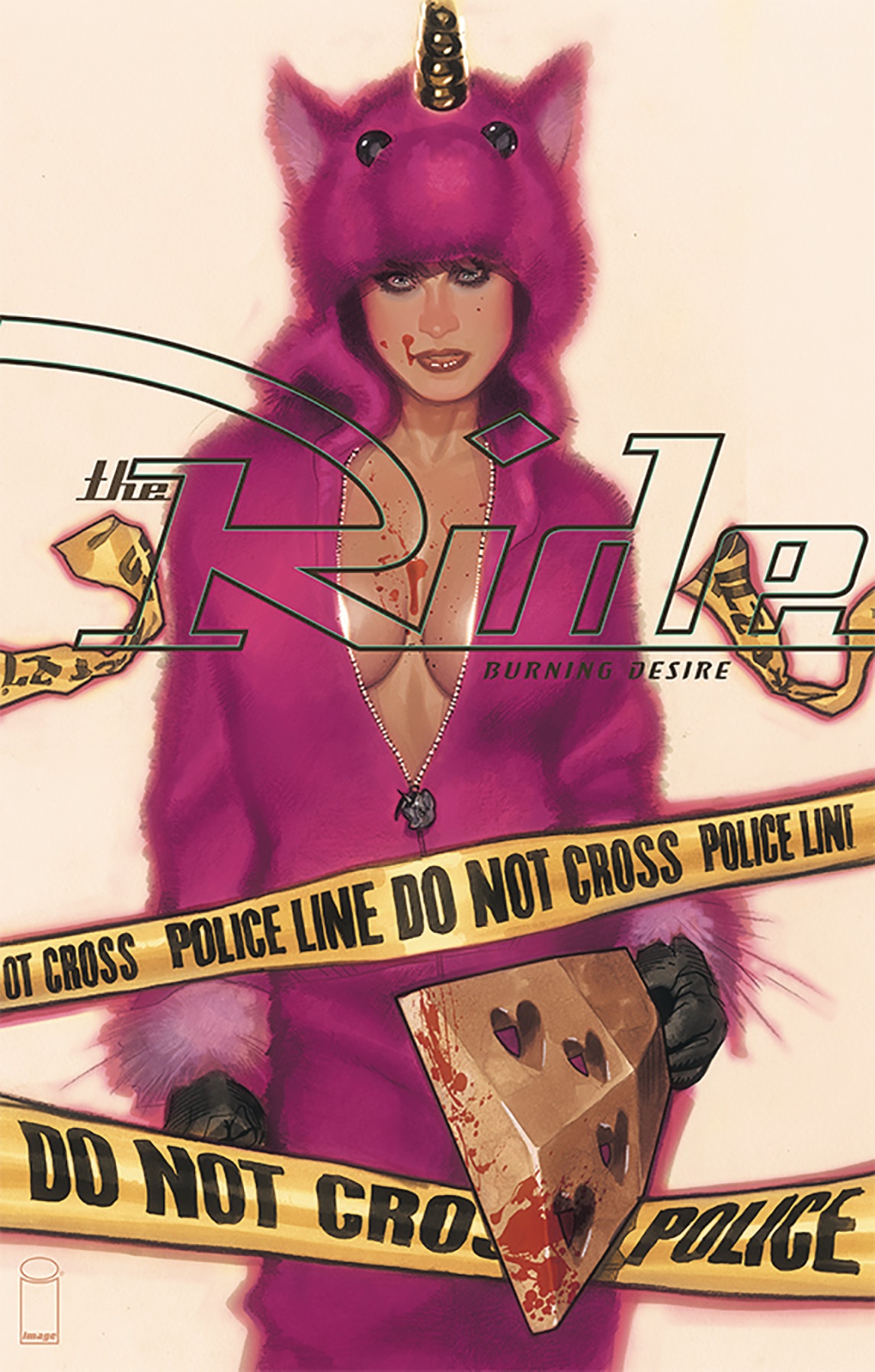 As a celebration of The Ride’s 15th anniversary, Image are releasing a 5 issue mini-series to mark the occasion by bringing  the award winning team of Plastic, Doug Wagner and Daniel Hillyard onto the book.  Throw in a back up feature with art by Adam Hughes and definitely have a celebration… of sorts.

Samantha Vega, formerly of Atlanta P.D., is back on the streets after a 15 year stretch.  Now, working as a bouncer at an exotic dance club, Samantha finds that whilst old friends are thought to be long gone, those that hold a grudge are seemingly ever present.

Doug Wagner writes a story that has a number of familiar tropes and ideas.  Cop wronged, not given a chance now that Samantha is out, hidden friends on the force; its pretty much all there.  The thing is, despite all the “seen-it-all-before”, Wagner manages to hook the reader by leaving the past the past, ensuring that those that are intrigued by Samantha are going to stick around to find out all that they can, eventually.

Daniel Hillyard’s art is engaging enough. His figure work is well structured and observed, enough to make me wonder how many exotic dance bars has Hillyard frequented?  With this book, well at least the main story, being more of a conversation piece, it is important that the facial elements are present to help enforce the emotions that the script calls for.  This probably the inconsistent part of Hillyard’s work.  Throw in backgrounds that can be vague and nondescript and you have a visual that feels incomplete in places.  Laura Martin delivers an almost neon color vibe to help sell the idea of the nightclub.  Cleverly, this is muted down to municipal magnolia / brown (I am not sure this is a real color, but it should be), for the police station, effectively showing the differences in a life lost and life starting anew.  Ed Dukeshire provides the letters in a style that feels a little lost amongst the big mainly panels used throughout.

The second story, also written by Wagner, feels a little Pulp Fiction.  Essentially, some bad beat cops go around to Felicity’s house for a little bit of illegal “search and seizure”.  However, the tide is turned when Sparkles the Unicorn appears to save the day.  To be quite clear, this story is not as bonkers as it sounds.  What makes this story stand out is the cheesecake, always quality pencils and colors of Adam Hughes.  Comparing the latter part of the book to the first is somewhat pointless; Hughes’ goes for the over exaggerated facial aspects, utilises good camera angles and has complete and complicated backgrounds.  The styles are as different as chalk and cheese.  Again, Dukeshire is on hand for the letters, this time having to work slight harder to make sure that the letters and word balloons do not impact or distract from the art.

Not having read the book that this series is celebrating, I am possibly a step or too behind.  Still, as stated, the tropes are familiar enough to ensure recognition even if you weren’t around 15 years years ago. Finally, who doesn’t like looking at Adam Hughes’ art?