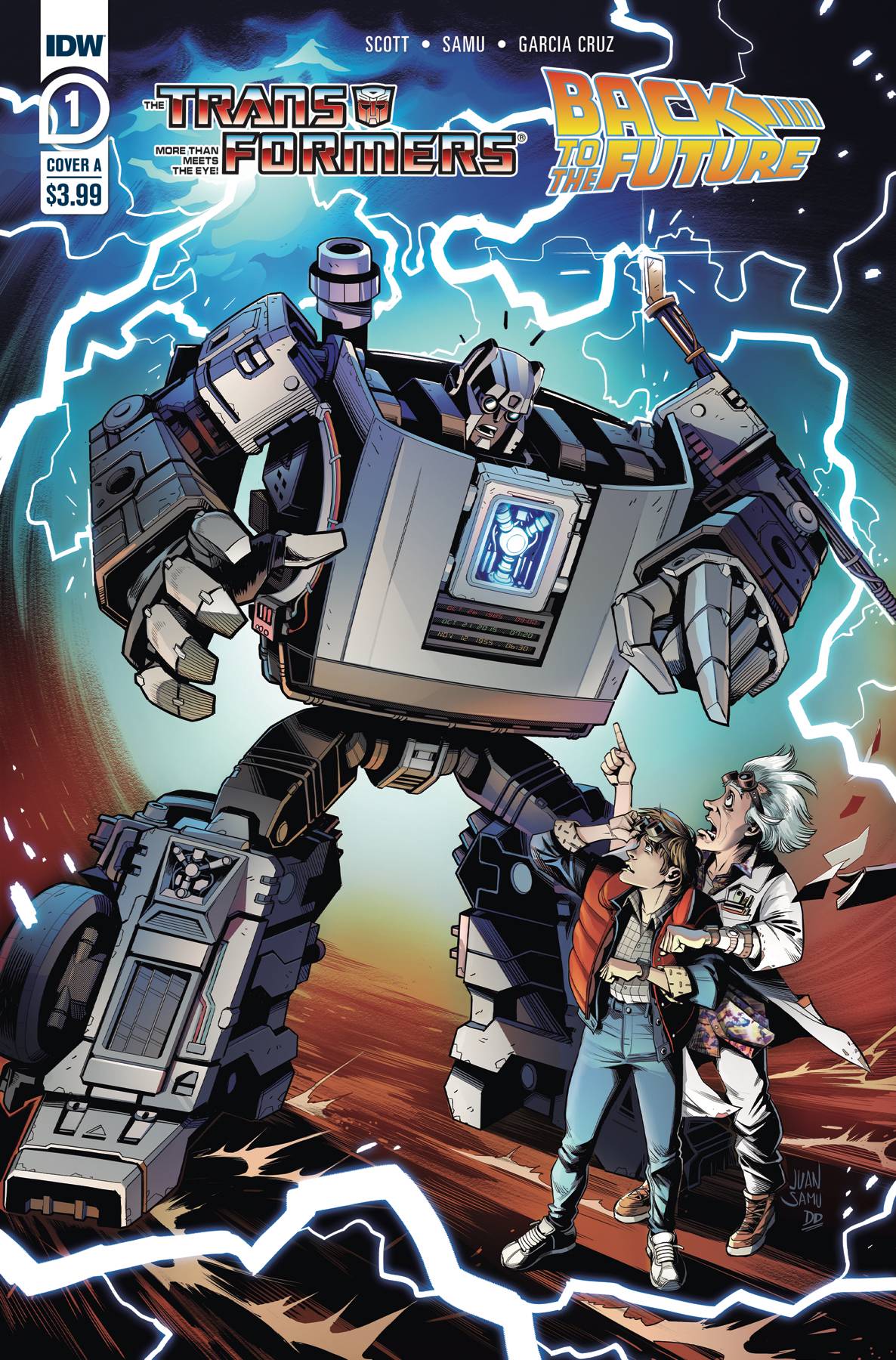 Transformers/Back To The Future is pure fun in the best possible way. It presents characters and tropes that we love from the classic films and cartoons and pulls them together in a great solid crossover. Cavan Scott clearly understands exactly what fans want from a crossover like this and has a firm grasp of the respective energies of the two franchises.

The crossover begins with the discovery of the DeLorean by the Decepticons. They witness the very classic scene where Marty first travels through time at the mall. Marty saves Doc but is discovered by Rumble.

The time traveling duo are attacked by Rumble and Ravage only to be saved by a Bumblebee in secret. Bumblebee then discovers Doc using the DeLorean to travel through time once again. Because of the discovery of the potential for time travel and of the DeLorean by the Decepticons, Marty wakes up to a very different present.

With all the right lines and all the right art, this book melds together a classic alternate universe for Back to the Future with the greatest desire of the Decepticons. This includes Biff Tannan as a middleman boss forcing Marty and his family to process Energon. This leads to an absolutely pitch perfect moment where Biff’s ‘boss’ Starscream raps on his head in classic BTTF ‘hello?’ manner.

As always Marty cannot stand a bully and quickly attacks Starscream before skateboarding away. He is pursued by Starscream in airplane mode. This is punctuated by the arrival of the DeLorean which surprisingly transforms.

The entire issue has great dialogue calling back to the classic Back to the Future films. It also has solid characterization of the Transformers that we know and love. Starscream and Bumblebee are clear standouts in this regard, but it is also nice to see Soundwave and his crew being used so well. The issue  leaves us with a promising cliffhanger as Marty has to make his way out of this horrific alternate universe with the help of the Transformer form of the DeLorean.

This crossover is off to an amazing start and with solid art by Juan Samu throughout depicting well both the world of Back to the Future with an alternate Hill Valley as well as the Transformers looking great in both vehicle and robot modes. The appearance of the characters don’t exactly match the film and series respectively, but they are all recognizable and well done. The action is a bit cartoony but fits the nature of the crossover.

Overall, this is a fantastic start to a promising series. If they can continue to do callbacks to classic lines and visuals from the Back to the Future films and still mix in the Transformers and have them feel organic to the storytelling, this could be an all-time great crossover.

By Johnny "The Machine" Hughes 51 mins ago

Review: We Only Find Them When They’re Dead #2

By Lucas Fashina 60 mins ago

Eisner Nom Takes the Stage with Phobos on Macroverse