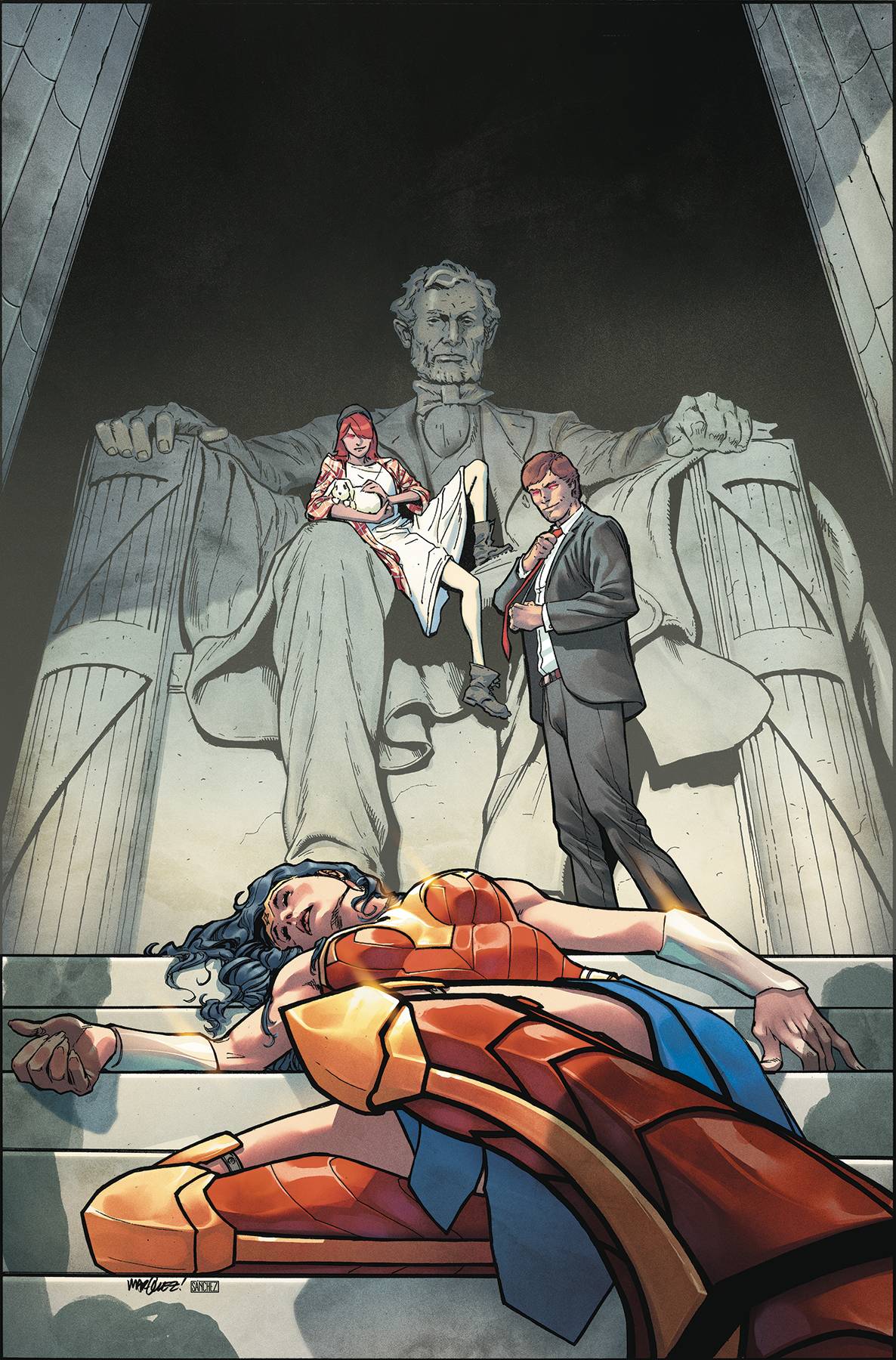 The world is full of liars.  Apparently this is news to Diana who has been walking around “man’s world” for quite some time now.  I do find it a little ironic that a superhero that works for the Government is disappointed that such differences in the truth exist.  Guess that’s what you get when you wear your heart on your arm bracelet.

Diana has a problem that she can’t solve by punching, at least not yet.  People across Washington are not just seeing hallucinations, they are interacting with them.  In doing so, there are casualties.  Now, there is only one person who can save the day…. Max Lord!

Mariko Tamaki continues to weave her spell in this issue.  I have missed an issue since my last Wonder Woman review, so I was a little surprised to see that nothing had really moved forward.  Could this be part of DC’s ongoing plan to drag out stories for trades?  Whatever the reason, despite the history lesson based on the Justice League movie and the alway readable Tamaki, I was kind of bored throughout the book.  At least there is a cliffhanger of sorts to contend with next issue.  Through the revisitation of plot points, Tamaki certainly has Diana’s voice down well, which is a big win for this whole series as a whole.

Last issue, #761, saw a change in artists; out went Mikel Janin and in came Carlo Barberi.  It’s the latter artist who shows up for this issue.  Barberi  is a different artist to Janin by far.  Barberi has turned Wonder Woman into a Wonder Girl!  She looks so young!  There are also issues around facial elements where her eyes aren’t in line and there is also things like legs changing size and length.  Yes, I am aware that some of theses are perception tricks, but if I can see the trick, then the magic isn’t working!  When it comes to Max, Barberi’s style reminds me of Scott McDaniel from way back.  Matt Santorelli  provides the inks with a mix of styles from light touches to heavier inks when required.  Colors are provided by Alejandro Sanchez who get to have fun with the Themiscyra locale as well as the fires in the first few pages.  As with #760, letters are provided by Pat Brosseau in a jagged style to isn’t as smooth as other letterers.  It’s a bold choice to try and stand out; here it’s standing out in a bad way as I found the style distracting.

Like many fans, I want the Wonder Woman. book to be fantastic.  I want it to blow my socks off the way that the Batman book does!  Looking over the whole run, I don’t think that has never happened.  With Tamaki on writing, Diana has a chance, the stories have to have a big impact, bigger ramifications.  In addition, the art needs to be more consistent.  With a new movie waiting in the wings, this should be a great time for Dc to push Wonder Woman as the icon she can be, rather than the middle of the road book she currently is.