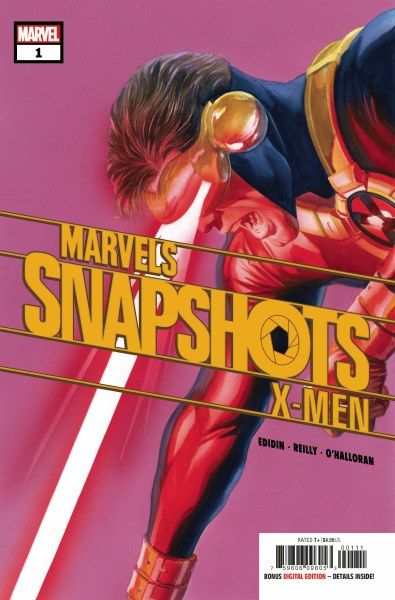 X-Men: Marvels Snapshots #1 is the perfect Cyclops comic. From the cover to the art to the characterizations, narrative and story it is extraordinary. It is the perfect encapsulation of who Cyclops is as a hero, a strategist, a geek and a mutant. In many ways Cyclops was always the closest representation we had of Stan Lee. He is the ultimate geek, always pushing forward, always thinking, always learning. This comic reminds us how much Cyclops represents who we all are, living in awe of heroes while we work to overcome our own self doubt and failings. The comics and films over the past decades have worked hard to make us forget what makes Cyclops so special, with this single issue we are reminded again of what makes him such a unique, nuanced, heroic and interesting character.

The well written story by Jay Edidin with art by Tom Reilly and colors by Chris O’Halloran follows Cyclops as he deals with the trauma of his past and the emergence of his powers against the background of the emergence of Marvel Superheroes. We begin with Scott in an state orphanage facing nightmares of his past coupled with bullies in his present. The art renders perfectly the transition between dreams of losing his parents and brother, the tedium of his life at the orphanage and the emergence of the bombastic age of Heroes like the Fantastic Four. The artwork showing the Fantastic Four  in action is epic in scope and reminds us as well what makes those heroes so great. Scott’s obsession with heroes and growing inspiration is coupled by issues with headaches and his vision.

The story plays with themes of both types of vision with Scott Summers gaining inspiration through a speech Mr Fantastic gives live as well as reading The Art of War as recommended by his librarian. This is of course coupled by his own visual triumph and tragedy as he saves a group of people trapped as Lady Mantis attacks Reed’s speech using refractions of light and then later is horrified as his powers manifest for the first time when he’s taking down the bullies. Through each page of the story we witness the formation of the hero we know today.

The art throughout mixes a classic feel with an incredibly unique look that pops in just the right places. The colors are a vital part of the story-telling as we shift from reflective and action packed moments. This book should be required reading for every filmmaker, writer and editor who ever misunderstood what makes Cyclops such an amazing, complex character, hero and leader.