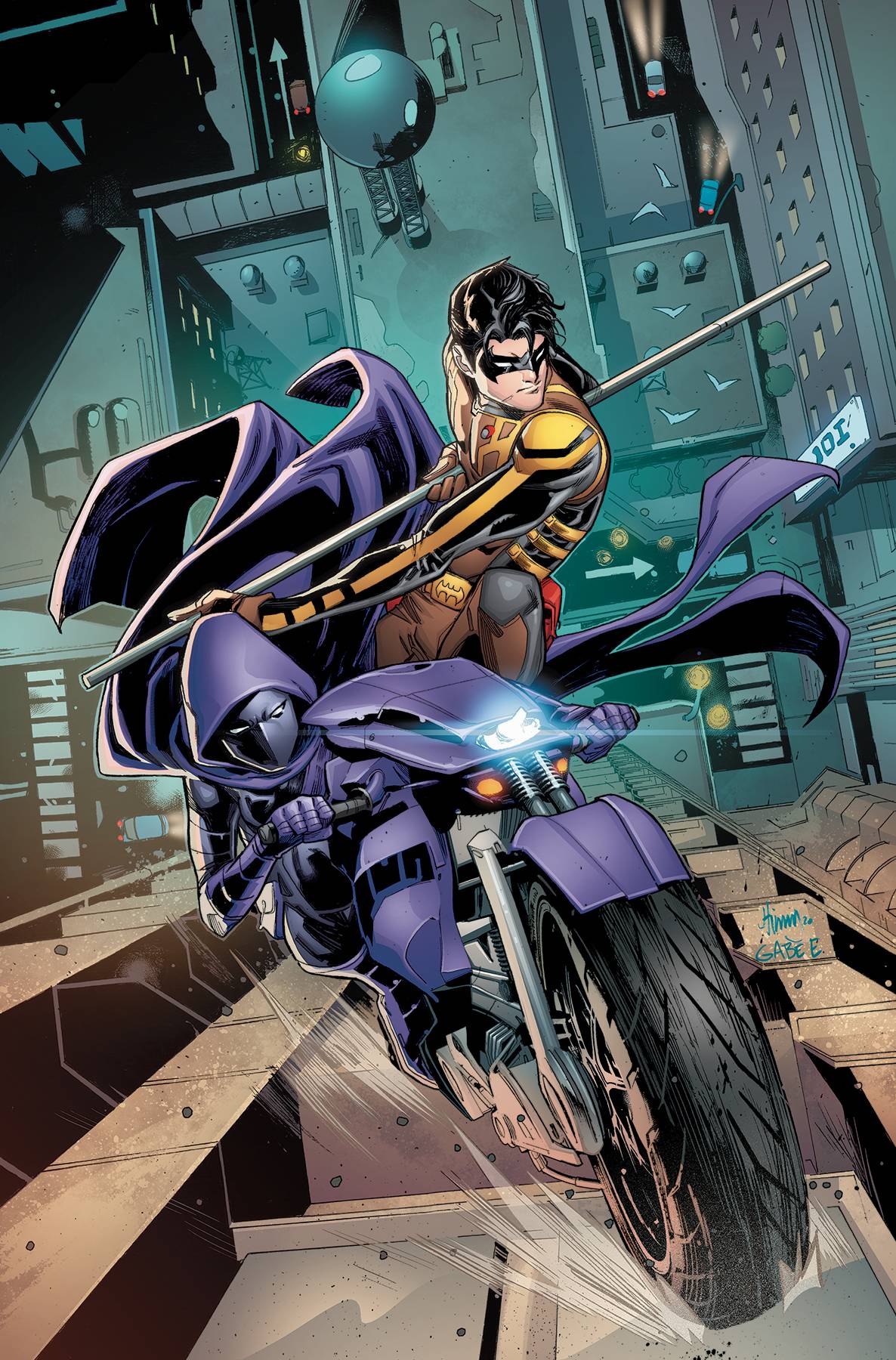 It’s been an odd couple of weeks for the Robins for sure.  First off, one of them is brainwashed into becoming Joker’s best pal, another shoots and kills a Joker, one gives up his Robin name during a doozy of a fight with his Dad and the last one gets his name back after going through a whole range of different names!

Spolier is back on the hunt for her father, the Cluemaster.  Thing is, he is after her too, though to kill her not to mend fences.  Aware of the history of the Browns, Drake gives Spoiler a hand of sorts and they manage to kind of sort out their relationship, again, at least for a while.

Written by Brian Michael Bendis and fellow Wonder Comics writer David F. Walker this book has an easy going feel to it that makes the book feel fresh in the face of all the event stuff going on in the DC universe as well as in Batman’s world.  This level of levity probably generates more good feelings for the book than it actually deserves in fairness.  There are some nice bits of dialogue, specifically how the young heroes interact when they are not together, but this is marred somewhat by the whole Clueless….. sorry Cluemaster diatribe seeking counsel from bad guys that he doesn’t want to pay! I get that this not paying for services not completed is supposed to be a gag and add humour to proceedings but in reality, it gets old real quick.  The pair do manage to add emotion to Drake and Spoiler, though this is a far cry from the characters Chuck Dixon heyday.  It is good to see Spoiler being described as a former Robin though.

The art is supplied by committee with Scott Godlewski providing art for pages 2, 3 and 10-22 and Michael Avon Deming chipping in on pages 4 through 9.  I have to say that on first reading, I didn’t even notice a difference.  On second viewing, there is distinct change in style, with Deming’s style is a less polished, less detailed version of Godlewski.  There is a breezy quality to booth that adds to the whimsy-ness of the book, although the first panel has a really young looking Tim! The colors are supplied by Gabe Eltaeb whose scheme gets in on the whole brighter than bright approach.  Finally, Wes Abbott provides an easy font that is easy on the eye; Abbot breaks it up well with well designed text boxes.

This book feels like a Young Justice book in name only, given as the focus is really on Spoiler and Drake.  The breezy nature of the book doesn’t help the almost throwaway name change or its importance down the line.  As readers of my reviews, and listeners of The Definitive Crusade, will know, I am a huge Steph Brown fan.  Seeing her get closure on her Dad is great for the character, thought it was done with much more style and best guest stars in her own Batgirl book (#24) by Bryan Q. Miller.