The State of X By Dusty Good

So the successful X-brand re-launch has come and gone; Fans are left with only one major question now; Can Marvel keep the momentum going with the X-men after issue one?

So allow me to take you on a round trip through the X-titles for this week and bring you up to speed with where Marvel is taking its merry band of mutants. WARNING! THIS ARTICLE MAY CONTAIN SPOILERS. READ AT YOUR OWN DISCRETION! 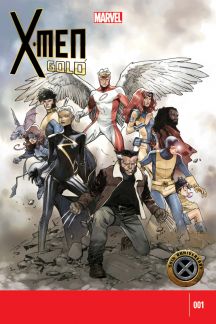 Let’s begin with last month’s big favorite and this month’s news maker. X-MEN GOLD #1. The smoke is still clearing from the firestorm that Marvel suffered after the internet outrage at artist Ardain Syaf, who was released from the book and the company for his insertion of anti-Jewish and anti-Christian propaganda into the artwork of issue one.

Syaf inserted references into the art, including numbers referencing protests by Muslim Indonesians of the Christian governor of Jakarta, Basuki Tjahaja Purnama. This includes a scene which has the Jewish mutant Kitty Pryde, as Syaf’s art places Kitty’s head next to the “jew” portion of a “jewelry” sign. The numbers 212 and 51 also appear in the background and are related to the Jakarta protests.

In another scene, Colossus is wearing a t-shirt with the letters and numbers “QS 5:51,” which reference a verse from the Qur’an that translates into a warning that Muslims should not appoint Christians or Jewish people as their leaders.

While the focus of the media has been on Syaf since this revelation, his art still appears in this issue and is scheduled to appear in issue three as well. Marvel has been forced to scramble for a replacement artist and has yet to announce a new regular artist for the foreseeable future. All of this is a bad sign for the future stability of what had been the strongest title of the re-launch. 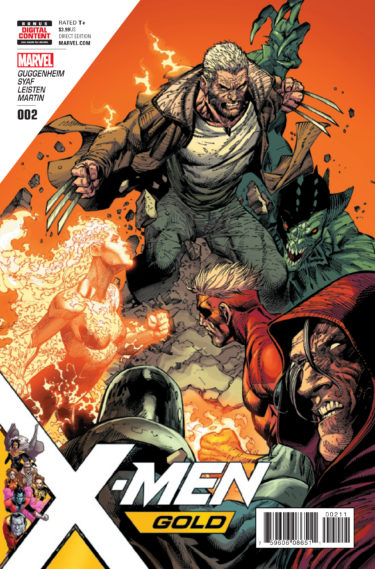 Issue two deals with the Gold team facing off with a new iteration of the Brotherhood of Evil Mutants. The Brotherhood feels less like a joke in Guggenheim’s hands and more like a terrorist group, as they kidnap the mayor of NYC, and taking Logan hostage.

Guggenhiem also utilizes the recent real world topic of travel bans and immigration and plays it masterfully into the plot of the X-Men universe. The media whipped itself into a frenzy as the idea of deporting mutants to another Genosha-style camp/Island might be the answer to the mutant problem. It’s not a far stretch of the imagination to envision mutants being rounded up and hauled away in the middle of the night in the current politically charged atmosphere.

Syaf’s artwork has now been forever compromised. While he has done a top-notch job in this issue, it feels tainted due to recent events. I am all for placing a visual gag into a comic. (Ethan Van Sciver is famous for his “sex” issue, where the artist hid the word sex on almost every page of a past issue of Grant Morrison’s X-run) But when those visuals are used to promote racial division then enough is enough. Marvel made the right move to kick Syaf from the book.

This title is still one of the strongest to come out of the re-launch, but thanks to this public snafu it appears that it might already be in trouble of keeping a consistent creative team on board. If this leads to delays are changes in plot, this book could be dead in the water before it even has a chance to start. 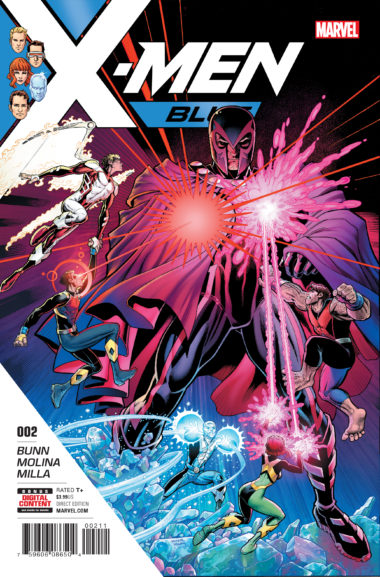 Leaving behind the media hoopla of Gold, we now focus on X-MEN BLUE #2. There is something almost calming about seeing the core five original (Cyclops, Jean Grey, Beast, Iceman, and Angel) X-men as teens again. I know that the concept was played with in all-new, all-different; but this time the recipe seems right. Bunn may have finally found his groove on an X-title. (I was very critical of his work on the Uncanny re-launch)

The idea of the core group working in conjunction with Magneto, instead of Xavier, presents the idea of an edgier team. Jean Grey seems to be at the forefront of this comic, her distrust of the master of magnetism has been tempered with a glimpse into his horrible past. This dynamic is setting the stage for a split among the team, as Mags is sure to go back to his villainous ways at some point. The question now becomes who will defect from the team with him when the time comes.

There is also a dangling subplot that involves Hank McCoy dabbling in magic, and it looks as though Beast may be in over his head. There are a number of magic wielding baddies for Bunn to choose from as the culprit, only time will tell who the writer has on tap.

While this title seems to be a slow burn starting out, Bunn and Molina are taking their time in setting up a solid team and playing up the personal interactions; which are vital to building a great foundation to build off of later.

My one note about the art is that there are multiple panels where Molina’s style shifts and a heavy anime influence can be seen. This includes a panel of Jean that is so different from the rest of the book that it is jarring to the reader. While I understand that anime has its place in comics, this change-up was so unlike the rest of the title that it hurt the immersion for me. That’s never good.

The Blue team might be a throwback to the original team; it is certainly a step in the right direction. I’m still looking forward to where this book is headed and hope that these inconsistencies will work themselves out as the creative team rolls on. 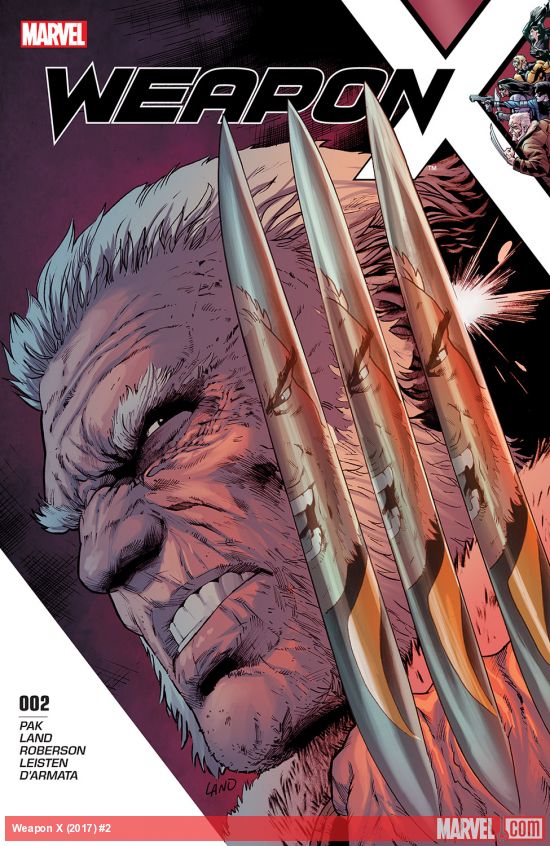 Next up is my personal favorite from the re-launch. WEAPON X #2 is the sleeper of the new X-titles.

The story of Old Man Logan and Sabretooth working side by side to defeat power enhanced killer robots is great. There is definitely that tone of “anything you can do, I can do better” not only by the robotic opposition, but between Logan and Creed.

Pak is building his mutant team of badasses one at a time. Logan is the center piece, but Sabretooth was introduced in issue one and now we see Warpath added to the mix, with the promise of Domino in issue three. The idea that these characters will all be working together to figure out who is trying to murder them is a great way to get these loners working as one.

Pak hit a couple of key character moments on the head when he had Creed run away from a fight and leave Logan for dead. This was a fantastic nod to Creed’s selfish nature and hatred for Logan in one swift move. There was also a scene with Warpath watching wild horses run from a pursing helicopter, only to find that the majestic herd wasn’t what they appeared to be.

Greg Land’s artwork is still as good as ever. The violence pops off the page, the struggle to stay alive permeates the pages, and in the sequence where the robots produce synthetic human flesh to disguise themselves; it was gross and unsettling.

This series is playing out like an action movie. Little is wasted as the plot moves forward at a fast pace and Land’s art is only making the reader’s experience that much better. A great start to a new book. 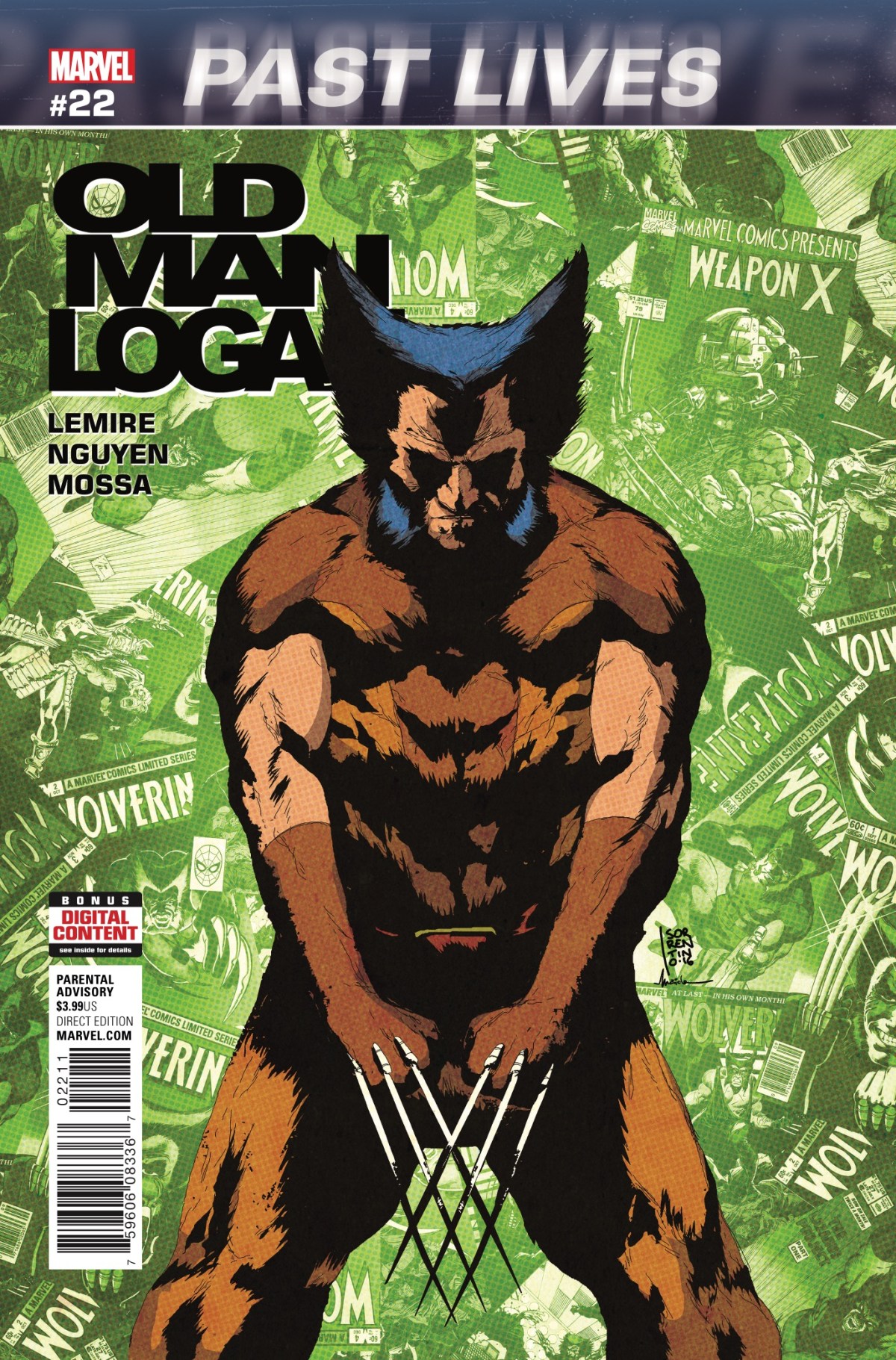 Last, but not least, is the sole remaining ongoing title offered in this week’s installment. OLD MAN LOGAN #22 takes an unusual turn. This title has been one of the strongest offerings from Marvel since its launch, but the recent “Past Lives” storyline is not up to the high standards this book made for itself. It feels more like a Wolverine greatest hits than a time travelling story.

Eric Nguyen is trying his best to imitate Andrea Sorrentino’s artistic style, but pales in comparison. There are panels in this issue where Nguyen’s art looks more like a broke Jae Lee than anything close to the Italian sensation. Nguyen tried too hard to mimic the title’s previous artist and fell sadly short. Eric’s own style would have been a vast improvement if left untouched; don’t believe me? Check out Nguyen’s Deviant Art page for an honest look at his artwork. You can spot the difference immediately.

Lemire has been the backbone of the Logan title for almost two years now, yet this current storyline seems to be filler. The writer has produced a storyline that takes a look at some of the character’s biggest moments, and this issue stops to look at Wolverine’s origin in Hulk #181, the death of the Dark Phoenix, Frank Miller’s first solo work with Logan, etc.

While a greatest hits album for everyone’s favorite six-bladed hero is always fun, this title has produced its own magic without pulling from other works. Lemire seems to be taking this time to “mail it in”; I’m not saying that Lemire’s work is poor, but it does have the feeling that the series has slowed for a moment, maybe Lemire is gearing up for his next big storyline… maybe this sidebar through time is a necessary reflection of the character’s past. Whatever the reason, the “Past Lives” storyline is falling flat.

Old Man Logan has been the flagship for the X-Men titles for months now, keeping the fans interested in the mutant universe while Marvel scrambled to get the rest of the comic line up to snuff. Now that the launch has happened, it might be just in time to allow the Logan team a moment to relax. This comic is still one of the best runs Wolverine has ever had, but this current storyline is the weakest offering we have seen from this writer and creative team.

Dusty Good has been a comic nerd for a quarter of a century. You can follow him on Twitter @audiohenchmen and suggest past or present comics you would like to see reviewed.